Abortion issue is a long way from settled

I was surprised to read this letter from the Guelph Mercury. I was surprised that it was even published. Don't they have editors over there to screen such hateful letters? And the irony is, that the letter writer uses the word hate five times, yet not one use is warranted, or even makes any sense.

Well no, it wasn't. In a democracy issues aren't "decided". If they were decided, it wouldn't be a democracy.

How are these ads offensive? The writer doesn't tell us, we must simply take his word for it. Here they are again in case you haven't seen them. You can decide for yourself. 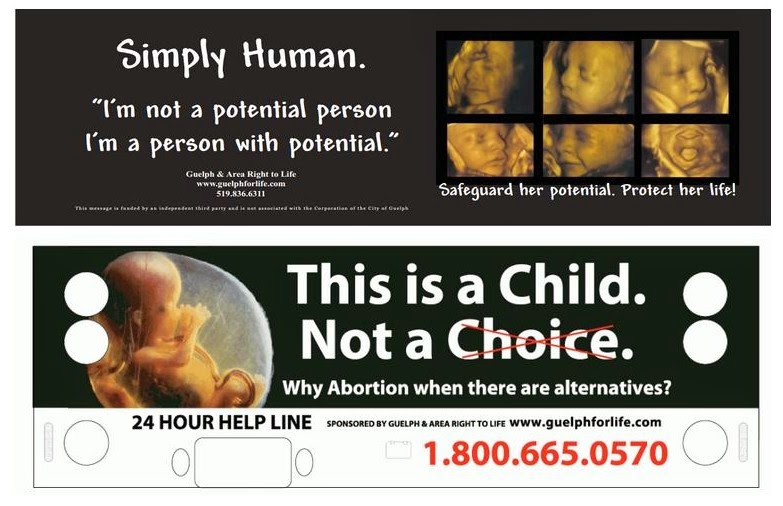 "It's hate literature, saying basically we hate you because you are killing people."

So what part of: "Simply human. I'm not a potential person I'm a person with potential." And, "This is a child. Not a choice." says "we hate you"? I can't read hate into the signs and neither can the letter writer. He's making that up.


"You are terrorizing a vulnerable minority of our population with your ads because of your religious belief."

Yes we do. It's called free speech. In Canada this is a constitutional right.


"Abortion was decided a long time ago by the majority."


"When abortion is legal, the crime rate drops quite noticeably."

Wrong. Read this: Did Steven Levitt, author of “Freakonomics”, get his most notorious paper wrong from the Economist.


"Every child should be a wanted child."


"You aren't alive until you can breathe on your own."

You are alive at conception. You are growing. You are not dead.

I don't hate you. I feel sorry for you. I really, really do.
Posted by Patricia Maloney at 12:23 PM