Dear Editor of the Record,

It is unfortunate that your biased reporting of this incident leaves the reader to believe that pro-life people are dangerous. This is a myth constantly delivered by the pro-choice movement. And the media.is more than happy to perpetuate this myth, the Record included.

This myth has now resulted in abortion bubble zones, which ensures that the charter rights of expression, religion and conscience are taken away from pro-life people.

Newspapers who engage in this kind of biased mentality not only does a dis-service to pro-life people (and all your readers), but in fact to your own journalistic standards.

Naturally you won't publish this letter. But that isn't the point. The point is to tell the truth. And I hope that maybe one person at the Record takes the time to actually ask themselves, "is she right?".

Will Justin Trudeau EVER get it? 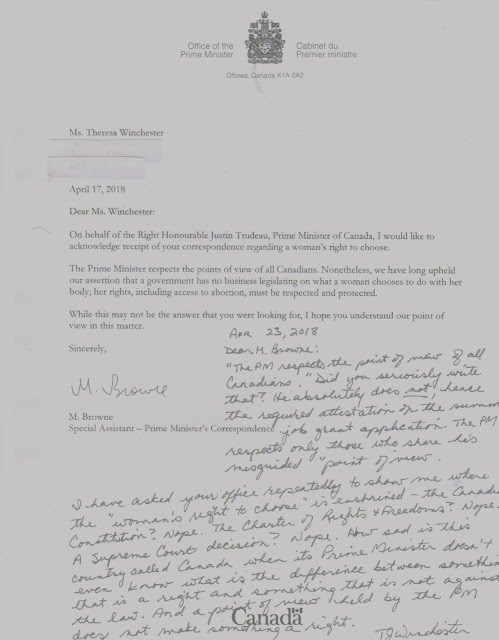 Posted by Patricia Maloney at 8:40 AM No comments:

The March for Life is coming up on May 10 this year.

You will remember last year's flag flap when Jim Watson and some of his councilors--and I mean that literally, they are not our councillors because clearly they don't represent us, they represent Jim Watson--took down our pro-life flag after they agreed to put it up.

I've been talking to some people and apparently they are wondering why the city took the flag down at all. That they never received a reason that made any sense. We do know that there was a lot of nonsense coming out of Watson's and his councillors' mouths trying to defend their discriminatory actions against it. But it was all a bunch of gibberish.

But we actually do have a reason why the flag was taken down. And the reason comes directly from the horse's mouth.

The reason is simple. As one person told me at the time: they went to the same strawberry social that Jim Watson went to and cornered him and asked him point blank. And Watson told them the reason was because pro-life people want to take away women's rights.


"...And finally, I brought up the issue of the pro-life flag at City Hall being taken down after complaints by some city councilors, and I expressed my concern about an interview he had given to Global News where he said pro-life campaigns are "divisive" and have no place at City Hall (http://globalnews.ca/news/3447325/pro-life-anti-abortion-ottawa-flag-jim-watson-what-happened/ ). He tried to avoid answering the question at first by diverting the issue away from City Hall and asking me why Parliament Hill wouldn't allow a pro-life flag to fly (which I had no knowledge of.) Getting back to City Hall, I reminded him that he allowed an LGBTQ flag to fly, and I asked, shouldn't pro-lifers be treated equally and be allowed to have their flag flown as well? Isn't that only fair? Why the double standard?

His response hit the nail on the head for me as to why he feels it is fine to discriminate against us. He said (paraphrasing): "The LGBTQ community promotes human rights. You want to take away women's rights." So that was it. Plain and simple..."

Watson was also rude to this (second-class) citizen of Ottawa:


"I couldn't just stand there and ignore such an accusation,so I started to say that that is not what we want to do at all, but I couldn't go any further because then he cut me off and said, "I'm not here to debate this issue; I'm here for a Strawberry Social," and he started turning to walk away. I remained calm and respectful the entire time, and in a last ditch effort, I politely asked him (even though I figured it was probably hopeless): "Would you be willing to meet with me sometime to discuss further." To which he curtly replied, "No, I'm not going to discuss this with you anymore; I've already given you ten minutes of my time" and he walked away. "Thank you for your time, Sir," I replied. (And I think it was actually only about 5 minutes of his time, not 10.)"

A rude mayor. Who has no idea what it means to be pro-life. Saying we want to take away women's rights which is untrue and unfair. Watson is just one more pro-abortion making stuff up about us to further his own agenda. Just like the other radical "pro-choice' chauvinist extremists in this country.

At least now you know. Let's see what Watson and company have in store for us at this March for Life.

Posted by Patricia Maloney at 4:43 PM No comments:

Dear Scott Simms,It is so refreshing to see a politician who will stand up and stand behind his principles.Your decision to vote for the Conservative motion against Justin Trudeau's discriminatory summer jobs program attestation even cost you your job as chair of the Commons fisheries committee. I can only imagine you went into this with eyes wide opened, and still you did it.Congratulations.I have pretty much given up hope of believing there were any principled politicians who have the guts to actually follow their conscience in Mr. Trudeau's caucus, even when it means they could lose their job. How wonderful. How grand. How totally awesome.At least you can go to bed at night and sleep well. And that, I think, is worth it.Sincerely,Patricia Maloney
Posted by Patricia Maloney at 8:35 AM No comments:

Abortion pill in the Outaouais

So the abortion pill is now accessible in the Outaouais region and paid for by taxpayers. Women who have already experienced the nausea and cramps linked to emergency contraception (“morning after pill”), well, take this horrible experience and multiply it by ten. That’s what chemical abortion is, only it can last for hours and even days. The body we see in the toilet, all charred and dismembered (or elsewhere, because there is no control over where and when the process culminates), it leaves a mark for quite some time. The violent contractions required to expulse the baby often bring on hemorrhage and other serious damage to the female apparatus. How sad that women’s bodies be treated as “crushers”. Not too great for self-esteem. To top it all off, there must be a follow-up check-up to ensure that all body parts and organs have been expulsed, and surgical curettage can be required to avoid general septicemia (poisoning).

There were 152 late-term abortions in Canada resulting in a livebirth.

All of these 1,053 were late-term abortions (20 weeks or greater gestation).

These numbers do not include late-term abortions from Quebec, so this number could be and probably is higher.

Stillbirths from Termination of Pregnancy:

Newborns from Termination of Pregnancy:


"A stillborn is any intrauterine fetal demise or termination of pregnancy occurring at or after 20 completed weeks of gestation in which the fetus shows no signs of life. A liveborn resulting from a medical abortion prior to 20 weeks is considered pre-viable for the purposes of classification and an abstract is not created."

You can read the full report from CIHI here.

Does Justin Trudeau get his marching orders from Joyce Arthur?

There have been so much written on the subject it's hard to keep track. In fact the only people in Canada who support the attestation (besides all liberal MPs minus two) are the radical fringe pro-abortion advocates.

All the media, all religious organizations, and most likely 99% of Canadians are against the attestation.


""Whatever we do, it will be still with the policy goal of ensuring that we don't in any way support organizations that are in any way working to undermine Canadians' rights," the minister told HuffPost.

Translated, it means the government will continue insisting applicants tick the box to attest that they don't oppose Canada's unrestricted access to abortion. The minister apparently can't get the point that opposing abortion undermines nothing that has anything to do with the Charter of Rights and Freedoms. On the contrary, the freedom of citizens to peacefully oppose abortion, or anything else, is the very base on which all rights — indeed, the charter of rights itself — are founded."

Imagine basing eligibility on government funding on whether or not you support unrestricted right to abortion, a right that doesn't even exist? A pseudo right.

This article says it best I think. Fr. De Souza discusses terms like, "dictatorship of relativism",
"ideological dictator" and "how a “liberal doctrine of diversity” can become a dictatorship."


"Whether it is called a “dictatorship of relativism” or “ideological colonization” or “thinly disguised totalitarianism,” it is easily recognized as spreading in Canada today. Fr. Rosica did a service by calling it out by name."

All these descriptions aptly describe our current government in Canada, headed up by a man who cares not a whit for Canadians' freedom of conscience rights, freedom of speech rights and freedom of religion rights. Who is advising Justin Trudeau anyway? Because their advice is not doing him any favours.
Posted by Patricia Maloney at 1:56 PM No comments:

Assisted death involves a doctor along with the patient

They wrote a letter to the National Post saying this, in reply to Barbara Kay's article where Kay discusses the need for palliative care.

I responded to Gokool and Ivey's letter with my own letter published today in the National Post.


Re: Choosing how we die. Letter to the editor, March 31

I am strongly opposed to medical assistance in dying, but that’s not the point I want to make.

Technically I agree with that statement as it stands. Clearly, if someone wishes to commit suicide, they decide this for themselves and I can’t decide for them.

What I have a problem with is that by definition, assisted suicide is much more. It involves a doctor. A doctor who is against medical assistance in dying must still refer that patient.

So the “decide” above is actually deciding for someone else: the doctor. And this I cannot agree with.