From the Protection of Conscience Project:

"... it is necessary to emphatically reaffirm that conscientious refusal to kill people is a manifestation of essential humanity that deserves the protection of law...

...Bill C-14 does not provide that protection. The government is deliberately ignoring the ongoing coercion of health care providers to compel participation in euthanasia, and Bill C-14 will allow coercion to continue..."

...the federal government can prevent such coercion because it has exclusive jurisdiction in criminal law. It can enact a law to prevent powerful groups, professions, or state institutions from forcing people to be parties to homicide and suicide. It can prevent those in power from punishing health care providers who refuse to arrange for their patients to be killed or helped commit suicide...

...It is true that the bill’s preamble states that the government will “respect the personal convictions of health care providers.” But – aside from the fact that preambles have no legal effect – what is that worth?

...the Special Joint Committee claimed that respect for freedom of conscience is exemplified by their recommendation that, “at a minimum,” objecting physicians should be forced to find colleagues willing to kill their patients. Behind this Orwellian perversion lies the Committee’s more astonishing premise: that the state can legitimately order people to become parties to homicide and suicide, and punish them if they refuse.

...Whatever else it might decide about euthanasia and assisted suicide, parliament should make it the law of the land that no one and no institution in Canada can be forced to be a party to homicide or suicide, and no one will be punished or disadvantaged for refusing to do so.”

Posted by Patricia Maloney at 6:50 PM No comments:

Re: Euthanasia Makes Us All Complicit, Andrew Coyne, April 19.In his book, Other People’s Lives: Reflections on Medicine, Ethics and Euthanasia, Richard Fenigsen wrote that, “In Holland, the country much praised for its practice of voluntary euthanasia, the lives of 400 disabled newborns are terminated every year by denial of medical assistance, dehydration/starvation and lethal injections. The reports of government-ordered studies revealed that lethal injections are given to 1,000 gravely ill persons who had never asked for death, but have a “low quality of life” or “no prospect of improvement;” some were killed “because the families could not take it anymore” or even because their beds were needed. Thus, along with the voluntary euthanasia that is going on, we witness the extermination of persons who embarrass their families, are undesirable for society, or arbitrarily judged unfit by doctors.

In a society, the ones who are in most need of protection are infants, children, the aged, the weak, the infirm and the marginalized. We are slowly turning into a society that, under guise of constitutional guarantees of freedom, autonomy and self-determination, is riding the slippery slope of exterminating the very people who need our protection the most.

Posted by Patricia Maloney at 12:22 PM No comments:

"Men desire authority for its own sake that they may bear a rule, command and control over men, and live uncommanded and uncontrolled themselves."
Posted by Patricia Maloney at 9:43 AM No comments:

Update April 19 - Someone contacted me yesterday and told me that when they tried to access the link to "Fern Hill"'s blog they got the following message:

Are you sure you want to go there?

http://scathinglywrongrightwingnutz.blogspot.ca/20... may be risky to visit.

Why are you seeing this?

When we visited this site, we found it exhibited one or more risky behaviors."

Anonymous blogger "Fern Hill" thinks that because she is "civil" in asking a question, she deserves an answer. She doesn't. Not until she decides to stop ridiculing pro-life people, which apparently, she is incapable of doing. 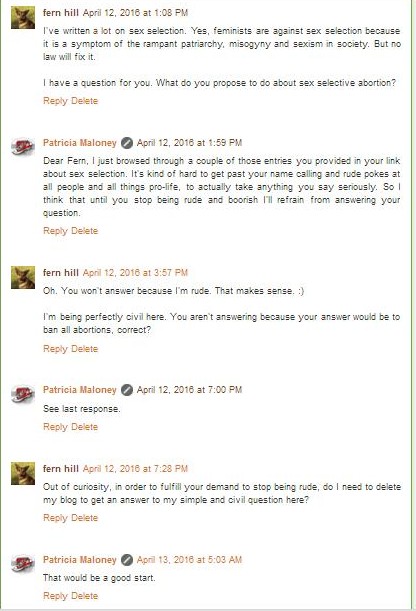 All one needs to do is read her recent blog on sex-selection abortion.

Or any entry for that matter.

Most of the sex-selection entry is--as expected--devoted to making fun and ridiculing pro-life people.

You just can't have a "civil" conversation with a rude boorish person like "Fern Hill". So why even try?
Posted by Patricia Maloney at 10:52 AM No comments:

"A new study finds that Indian-born women in Canada with two or more children are giving birth to more baby boys than expected. And researchers suggest abortions related to sex selection may be a major reason.

The study says Canadian-born women in Ontario gave birth to about 105 boys for every 100 girls between 1993 and 2012, consistent with the average in most of the world.

That ratio rises to 326 boys per 100 girls for Indian-born mothers with two daughters who had an abortion preceding her third birth.

It was 409 boys for every 100 girls if the mother had more than one abortion."

You'd think the feminists would be up in arms over the sex selection abortion of their own. But I'm pretty sure we won't hear anything from them. The pro-abortions never meet an abortion they wouldn't condone.

Posted by Patricia Maloney at 8:17 AM 6 comments:

Planned Parenthood lies in their consent form for abortion.

Here is the consent form. 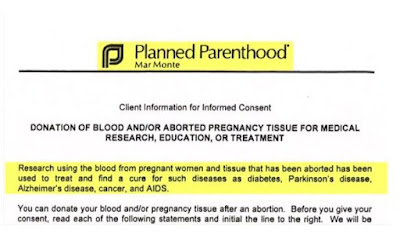 I guess when you make money from the illegal sale of aborted baby parts, lying is no big deal.
Posted by Patricia Maloney at 1:49 PM 1 comment:

Medically necessary help for autism and not abortion

In 2010, Ontario spent at least 70 million dollars on medically unnecessary abortions. (2010 is the last year we have accurate statistics for, because of the Ontario government's Official Abortion Secrecy Policy.)

Now we learn that there are parents with autism, who can't get treatment for their children, and have to pay for the treatment themselves, at great personal cost.


"Antonio and Linda Dimanbro have spent over $40,000 to help their son Anthony, 7, in the absence of provincial funding. They waited over three years for treatment, from Anthony’s diagnosis at the age of two-and-a-half until last year, when a fundraisers and friends and family helped fund his treatment. Kara Onofino and her husband have poured over $60,000 into support for their son Justin, 7 — but she also noted “it’s not fair” to families who can’t afford that."

Does this make any sense at all?

That 70 million could go a long way to helping families suffering from the lack of proper medical care for their children suffering autism, help that is actually medically necessary.

Kathleen Wynne should be ashamed of herself.
Posted by Patricia Maloney at 11:09 AM 1 comment:

After last year's March for Life (which took place on May 14, 2015), I did an ATIP to the RCMP to find out how they calculated the number of marchers at the event. According to the Ottawa Citizen, the RCMP said there were about 8,000 people.

So how did the RCMP come up with that number?

The RCMP march numbers are always a lot less than what pro-lifers estimate. So I wanted to find out how they did their calculations and after the march I did my own calculation for the march and concluded that our estimates of 25,000 marchers were reasonable.

The response I received from my RCMP ATIP started like this:


"all the information reviewed qualifies for exemption pursuant to sub paragraphs 16(1)(a)(i) and 16(1)(a)(ii) of the Act*. We have however, exercised the discretionary powers provided by the Act and have released some of the information."

As you can see below from what I did receive, the RCMP's "calculations" appear to be only estimates. There was no indication that the RCMP had done any actual crowd counts. In fact any crowd numbers indicated, vary hugely from 8,000 to 25,000+.

On page 1, the RCMP states that 2015 crowds were about 10,000 people with no indication as to how they came up with that number.

Predicted crowds were 25,000. (Probably this number came from the organizers.)

Here are the references.

On Page 128 in an email exchange between Daniel Bernier, Nikolas Zouroudis and Richard Gladu:
"As you know there are typically 20,000 or so participants.

It looks like all of these crowd counts are estimates, and that no effort was made to accurately estimate the number of people attending.

Another question I have is this: why would the RCMP claim exemptions to giving me information? i.e. based on:


"the detection, prevention or suppression of crime or the enforcement of any law of Canada or a province". *

What crimes were committed? Certainly none by pro-lifers. So what else was in the remainder of the 170+ pages I didn't receive? Interestingly there were five female pro-choicers arrested for jumping over barricades. But no violence at all from 25,000 pro-lifers.

Until I can see some hard evidence that the RCMP is calculating march numbers based on reality, I think I will stick with the pro-life number calculations.

16 (1) The head of a government institution may refuse to disclose any record requested under this Act that contains
Posted by Patricia Maloney at 6:32 PM No comments: