Fr. Tony Van Hee has retained constitutional lawyer Albertos Polizogopoulos to represent him against a ticket he received last Wednesday at the Ottawa Morgentaler abortion site.

Fr. Van Hee received the ticket last week for his silent witness in front of the abortion facility in Ottawa under the "Safe Access to Abortion Services Act Section 3(1)(e)(iii)". You know the one. Where Jim Watson got an Ontario law enacted by Kathleen Wynne's Liberals to prevent people from using their constitutional right to free speech? Yes, that one.

According to the ticket, Fr. Van Hee committed the offense to "intimidate or attempt to intimidate the person".

It's kind of hard to intimidate someone when you are across the street, looking away from the abortion site, holding signs that say absolutely nothing about abortion:

They really do want to shut us up don't they?

It will be interesting to see how this plays out. Polizogopoulos won my own freedom of expression case against those same Wynne Liberals, and more recently a court challenge for the Christian Heritage Party.

I know who I'm rooting for. And it isn't Jim Watson.
Posted by Patricia Maloney at 10:28 AM No comments:

The Mad Hatter has nothing on Ontario's bubble zone law

This abortion bubble zone law has got to be one of the most moronic laws that the former Liberal government in Ontario--together with Ottawa mayor Jim Watson--ever dreamed up.

Of course, we know it was done for purely political reasons. In fact we have proof of that. But first let's recap this down the rabbit hole lunacy, and then update it with the latest.

Jim Watson falls for Arthur's nonsense and includes her make believe non-reasons for a bubble zone:

His letter to the Attorney General concludes with this gem:


"Legal services has included the recommendations made by the Study's authors in its analysis of the available options."

I am not kidding.

The Attorney General buys this mythological need for a bubble zone and implements the new law.

I learned of all this through a freedom of information request on the bubble zone.

I am now appealing to the Information and Privacy Commissioner of Ontario because of all the information that I didn't receive.

In fact, what I did receive was pretty sloppy stuff. No index was included in my package. When an index finally arrived (after I told the information commissioner I hadn't received it when she asked), it referenced document numbers, but my information only had page numbers and no document numbers. So clearly it was impossible to match the index with the stack of papers I received.


"with respect to the police reports, I had followed up earlier with the ministry [attorney general] and they advised there were no police reports."

Even a pro-abortion's own research corroborates the extremely low incidence of any harassment or violence at abortion clinics in Canada. This information was also not included in Jim Watson's so-called "rationale" for an abortion bubble zone.


"Facilities reported very little harassment (Table 4). No Canadian facility reported a resignation of an abortion provider–physician or any staff member owing to harassment. Only a single facility reported any resignation of an allied health professional staff member, and in this case the facility specified that the one resignation was not owing to violence, fear, or threats. Similarly, two-thirds of reporting facilities (49 of 74, 66.2%) indicated no episodes of harassment or violence in 2012, with a further 28.4% (21 of 74) reporting solely picketing without interference. Among 7 facilities reporting “other” episodes of harassment, half specified only receipt of harassing e-mail."

And now we have an elderly priest being charged with breaking this stupid law. Fr. Tony Van Hee's ticket tells us the reason he was charged:


"Intimidation or intent to intimidate a person."

A sign about free speech is intimidating? To whom? Jim Watson?

Fr. Tony was also facing away from the abortion facility when he held that "intimidating" sign. So he wasn't contravening this nonsensical clause in the law by:

Yes. This law is political. Pure and simple.
Posted by Patricia Maloney at 1:02 PM No comments:

Praying to end abortion standing in the corner

Today Maureen and I joined other people who want to pray for an end to abortion during the 40 Days for Life. We prayed two rosaries and one Divine Mercy Chaplet. We were there from 7 am to 9:30 am. I also went to Mass at 8:00 at St. Pat's. Lots of prayers, which is what the scourge of abortion needs.

We have Jim Watson to thank for our being prevented from praying across from the abortion facility.

No freedom of expression rights for us, as we stood in the corner for our audacity at praying across from the facility in days gone by.

Maureen was so cold that she put a bag inside her coat to try and keep warm, like an insulation layer. I called it her bag motif. See bottom picture.

Jim Watson's attempt to move us out of the way only means we will now have to pray from a distance. Prayers work just as well no matter where you pray. He can't take away our freedom of conscience and religion rights as much as I'm sure he'd like to. Sorry Jimmy. 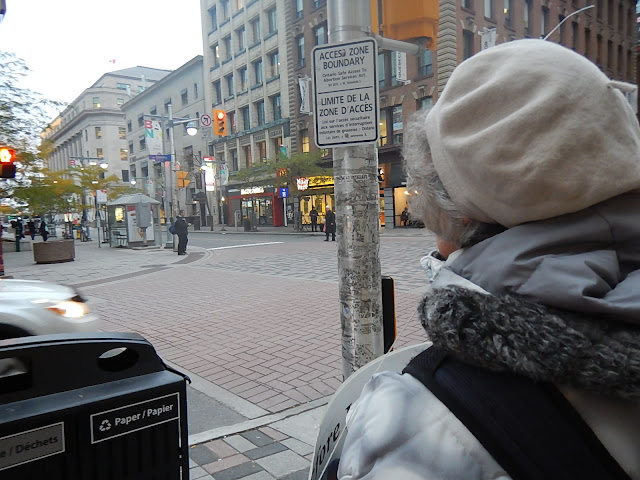 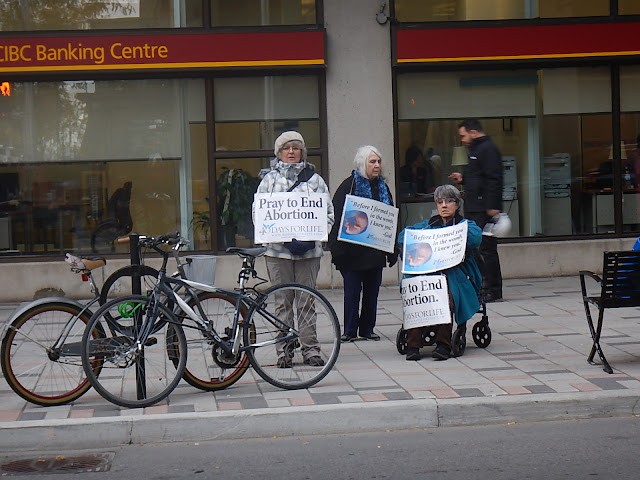 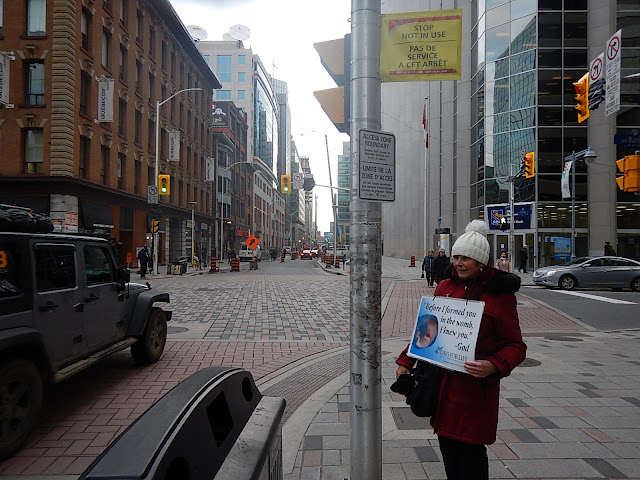 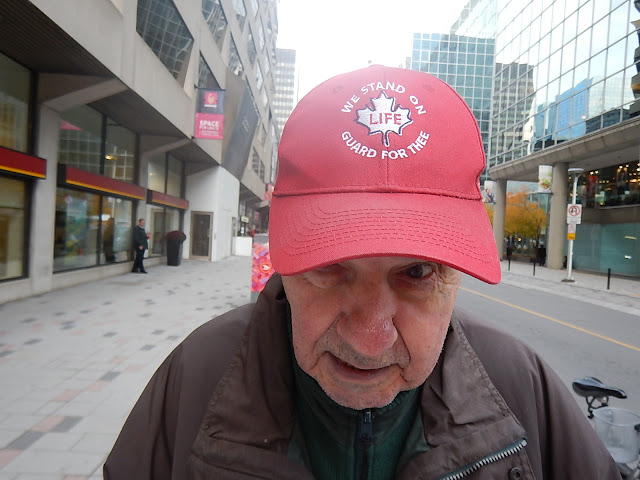 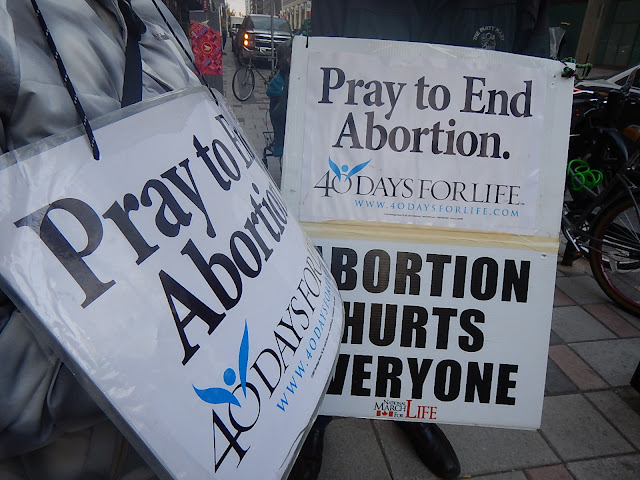 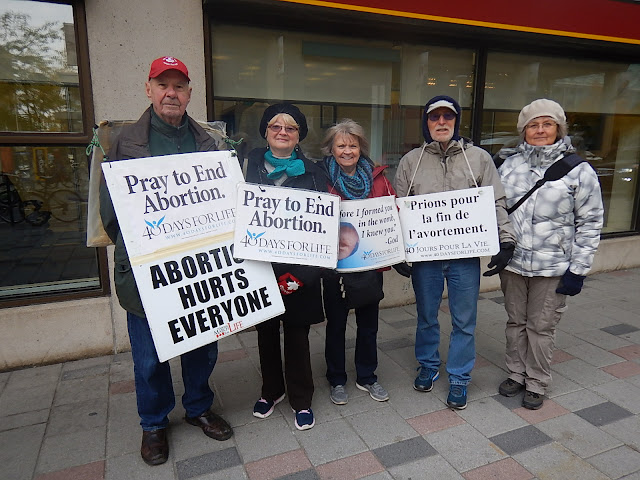 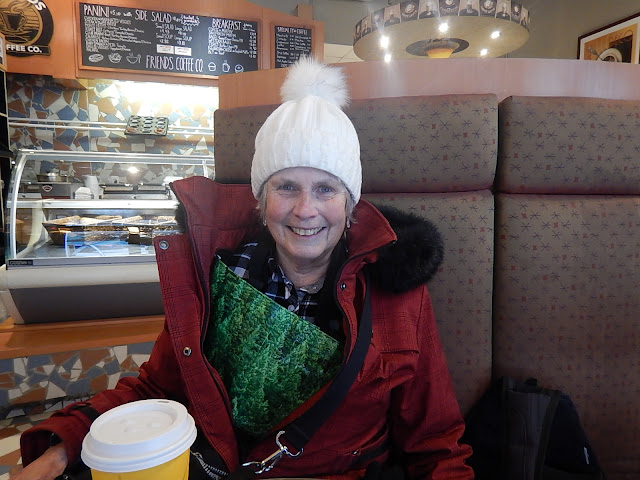 Posted by Patricia Maloney at 1:45 PM No comments:

"The primacy of free speech - cornerstone of western civilization - without free speech the state is a corpse" Fr. Tony Van Hee.

Fr. Tony is my hero. 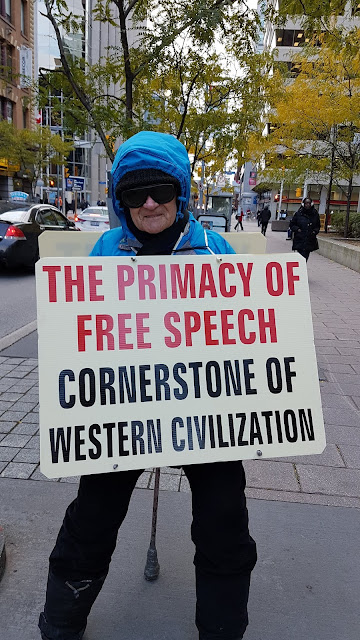 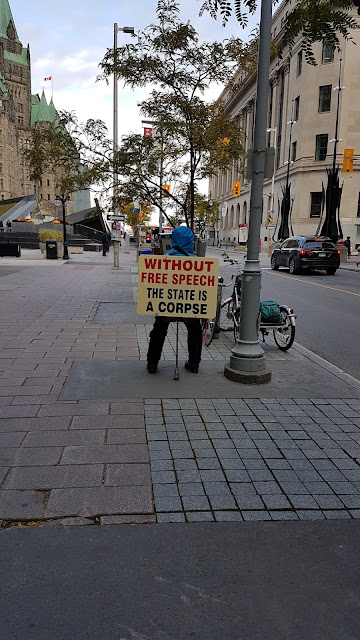 Email ThisBlogThis!Share to TwitterShare to FacebookShare to Pinterest
Labels: Fr. Tony Van Hee, Freedom of expression, hero, The primacy of free speech - cornerstone of western civilization, without free speech the state is a corpse

So yesterday I get a knock on my door. I answer it. One of Tobi Nussbaum's volunteers is there.

Her: Hi I am canvassing for Tobi Nussbaum.

Me: I won't be voting for him.

Her: Would you like to speak with him, he's just out here.

Me: I didn't like the way he handled the pro-life flag last year when it was taken down.

And off she ran. She couldn't get away from the door fast enough.

Man our city councillors and mayor don't like being around us.
Posted by Patricia Maloney at 12:48 PM No comments: