So today I thought I should talk to you again. And you can just ignore me again. 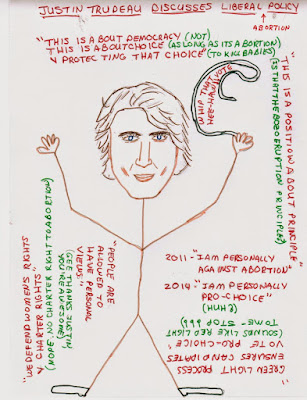 Anyway, recently I listened to the first podcast from the Pro-life Guys who work with CCBR. You remember CCBR? You once said that CCBR shouldn't receive government funds because they "oppose a woman's right" to kill her pre-born child.

(Each episode includes this quote from you. How exciting is that?)

It's a really great podcast. I think you should listen to it. Though I know you won't.

What's really great about this podcast, is that it explores and discusses pro-life apologetics. Why being pro-life is good and right. How abortion is illogical if you are a defender of human rights for all people, etc.


"We’re two guys who are passionate about ending the killing of pre-born children in Canada, and this is a podcast dedicated to giving you the tools you need to change minds and save lives from abortion. Join us as we discuss all the pro-choice justifications for abortion and share how we counteract them on the streets and talk to some of the leaders in the movement to hear their stories and learn from them!

Even though you've decided that CCBR can't receive tax dollars for the work they do, (unlike the millions and millions you give to those who kill pre-born children and to their supporters), these young people still do the work they do. That's called determination.

I wonder why Joyce Arthur and Fern Hill don't have a pro-choice apologetics podcast. They could call it the Pro-choice Girls. And they could defend their position on how a woman's (non-existent) right to kill a child she doesn't want, is a legitimate point of view. I bet you'd listen to that podcast eh Mr. Trudeau?

CIHI notes in their published stats that:


"Induced abortions are not performed in clinics in Prince Edward Island."

Yet you can see from the chart below that Health PEI, not only reports abortions in PEI clinics, but that they report more abortions in clinics than in hospitals. According to the FOI I received from Health PEI, the clinic in question is the Women's Wellness Program & Sexual Health Services. It seems that Health PEI must be tracking these clinic abortions as hospital abortions. But there are also a few abortions being reported in a hospital setting.

Also medical abortions have been taking place since 2015 in PEI, albeit a very small number of them.

And as you can see, PEI Health's abortion numbers are quite different from CIHI's numbers.

The most troubling part of these numbers is that were more than twice as many abortions performed in 2019 (143) as were done in 2017 (67). Abortion rates (as reported by PEI Health) are clearly increasing.

Posted by Patricia Maloney at 9:57 AM 7 comments: