Doctors need conscience protection please help if you can

This is extremely disturbing. This 6 minute video shows how doctors are being pressured into being involved in MAID.

Canadian Physicians of for Life is making a financial appeal to support the court challenge in support of doctor's conscience rights. If you can make a donation I urge you to do so.
Posted by Patricia Maloney at 8:40 AM No comments:

How pro-choice people get it wrong


Last week in the Toronto Star you wrote a story about an abortion protester outside the Morgentaler clinic in Ottawa. You think abortion protesters are "creepy, some unwell, and some threatening". You make all sorts of nasty unproven allegations in your opinion piece.

Cyril Winter's responded to your article here when he called into Mark Sutcliffe's radio show. Winter says he doesn't spit on anyone and doesn't speak to anyone unless he is spoken to. He says he is peaceful.


You believe that people who peacefully protest outside abortion clinics are "religious fanatics" (as you said to Mark Sutcliffe on 1310 news radio on Friday).

You seem to think that pro-life people do not care about the women who have an abortion. You could not be more wrong. If this is what you honestly believe you have no idea of what being pro-life is all about.

Abortion information - ask and you shall receive?

I have now asked the Ontario Minister of Health and Long Term care for abortion information starting back on Feb 2, 2017 (that's over 10 weeks ago) and my fourth request was yesterday.

I was in court on February 1, 2017 and was told by the Government's lawyer Dan Guttman, that all I had to do was ask for this information, and I would receive it. Mr. Guttman said this to judge Marc Labrosse who was listening to my charter challenge case against the Ontario government for hiding abortion information.

Contrary to Mr. Guttman's statement though, this is not a case of ask and you shall receive.

Was Mr. Guttman speaking falsehoods to judge Labrosse? Was Mr. Guttman misinformed by Kathleen and Eric? Was Mr. Guttman hoping to dupe the judge into ruling against my case because, hey we'll just tell that Maloney person she can get this abortion information outside of FIPPA and maybe if we just tell her this she'll just shut up already?

I can't answer these questions, but they are pretty darn good ones even if I do say so myself.

In the meantime, I wait. And I wait. Hopefully the cows will come home soon.
Posted by Patricia Maloney at 1:17 PM No comments:

Woman's right not to have someone murder her unborn child

Malcomson says that Cassie was an exception, and therefore the law should ignore her choice--her daughter's life in the charges against the person who killed them. Cassie was killed by a stranger and she is an "exception".


"I will not support this bill."

The pro-abortions can't get out of the way of their blind abortion ideology. Everything is about abortion even when it isn't. It supersedes logic, compassion and reason. It's the only way they can rationalize not supporting this common sense legislation of protecting a woman's unborn child she has chosen to keep.

Read Jeff Durham's latest post on Arianna Goberdhan who was murdered along with her unborn child. Just like Cassie, the mother of Molly, Jeff's daughter.
Posted by Patricia Maloney at 6:46 PM 1 comment:

Email ThisBlogThis!Share to TwitterShare to FacebookShare to Pinterest
Labels: abortion, Cassie and Molly's Law, choice is an ilusion, Sheila Malcolmson, unborn, woman's right not to have someone murder her unborn child

Pierre Lemieux - a woman's right to be a mother

The only people who could "strongly dislike" this kind of legislation are people like Joyce Arthur and her pro-abortion friends. Unbelievable but true. Can you even imagine not supporting a bill that would protect an unborn child that a woman has chosen to give birth to? No I can't imagine it either.

Kudos to Pierre Lemieux for announcing this.

Email ThisBlogThis!Share to TwitterShare to FacebookShare to Pinterest
Labels: a woman's right to be a mother, Cassie and Molly's Law, Joyce Arthur, Pierre Lemieux, pro-abortions, The Unborn Victims of Crime Act

Ont. Gov't still has no conscience protection in Bill 84

The College of Physicians and Surgeons of Ontario still requires an effective referral from doctors if requested by a patient – even though a care coordination service has been created.

Many Members of Provincial Parliament and Ministers have been confused by this statement and are now under the incorrect impression that an effective referral is no longer needed with the model the government has implemented.

To protect conscientiously objecting doctors and health care providers here in Ontario we must implement a conscience amendment in Bill 84.

Can you please ensure that proper a conscience clause is inserted into Bill 84?

Gov't still not addressing "duty to refer" clause in Bill 84

After complaining to our MPP Nathalie Desrosiers about the "duty to refer" clause as it relates to Medical Assistance in Dying (MAID), a group of us received a response.

Nathalie does not respond to our "duty to refer" concern.

I responded to her with this letter:

Thanks very much for your email reply to us.

However I notice that you did not specifically address our very important concern regarding "duty to refer" as it relates to MAID.

Can you please do so?

If they are forced to "refer" patients, many good doctors will leave the profession. This is not what the citizens of Ontario want or need.

As well, if we are assured of this provision being safeguarded, it also gives us the peace of mind that when we go to a hospital or doctor, that there WILL be doctors who are NOT participating in MAID, and we can feel safe and secure in that knowledge that, we will not be encouraged to prematurely end our lives by killing ourselves.

We look forward to hearing back from you at your earliest convenience.

Posted by Patricia Maloney at 8:28 AM No comments:

This is a very telling article on the pro-abortions' relentless attack on crisis pregnancy centres in the US.

"... the abortion lobby has zero to show for its 40-year effort to expose pregnancy help centers as the hives of scum and villainy “they” would have us—or in many cases, legislators—believe.

It’s not for lack of trying either. Every one of the 2,600 pregnancy help locations in the U.S. poses an immanent threat to the abortion cartel’s bloodthirsty cause. The abortion lobby is well aware of that fact, and has been fighting tooth and nail against pro-life alternatives to abortion ever since the late 1960s, as abortion was legalized at state levels prior to Roe v. Wade.

In 2000, the nation’s leading abortion lobby group, NARAL Pro-Choice America, released a pamphlet entitled, “Unmasking Fake Clinics,” which has set the trajectory for every attack on pregnancy centers since. Periodically released national and state-level attacks (see examples here, here and here) have appeared ever since, rehearsing the same tired and baseless claims that uniformly fail to point out any wrongdoing on the part of a pregnancy center.

Just pro-lifers serving women with free, community-supported, life-affirming care. Nothing to see here. Thanks for stopping in, officer..."

Here in Canada we have our very own pro-abortions do their darnedest to do the same here in Canada. Read the whole article. Worth the read.
Posted by Patricia Maloney at 6:37 PM No comments:

Reported abortions in Canada are up

CIHI total reported abortions numbers are up in Canada. I say "reported" because we know what is reported, is under reported.

And I still haven't heard back from Health Minister Eric Hoskins yet where I asked him for the total number of abortions broken down by hospitals, clinics and doctor's offices. What's he waiting for, the cows to come home? 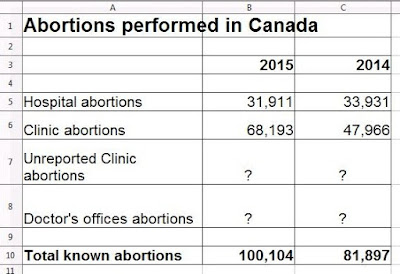 Posted by Patricia Maloney at 5:26 PM No comments: