Abortion Statistics: Despotic Secrecy or a Right to Know?

Pierre Trudeau once said:
"Democratic progress requires the ready availability of true and complete information. In this way people can objectively evaluate their government's policy. To act otherwise is to give way to despotic secrecy ."

In 2006 the Conservatives promised--via their Federal Accountability Act--that:
"Government will become more transparent and more open.”

Before 1988 it was mandatory for hospitals and abortion clinics to report abortions performed to Statistics Canada. With the Morgentaler ruling in 1988 when abortion was decriminalized, Statistics Canada deemed abortion reporting to be “voluntary”.

Allowing abortion reporting to become voluntary, resulted in a decreased level of clinics reporting. Statistics Canada who collects and publishes all sorts of statistics has always prided themselves on the quality of their statistics. But since abortion statistics were now unreliable, SC didn’t want their name associated with numbers that weren’t accurate. So in 1995 the responsibility for abortion data collection was transferred to the Canadian Institute for Health Information (CIHI). CIHI is funded by federal, provincial and territorial governments but is not a government department.

This is goes against what the Conservatives' Federal Accountability Action Plan was supposed to accomplish:
“Allow Canadians and organizations to participate more fully in public policy development and better assess the Government of Canada’s performance in order to hold it to account...Government will become more transparent and more open.”

Part of this Plan includes the Office of the Information Commissioner
“Who is committed to ensuring that individuals' rights to information under the Access to Information Act (ATIA) are respected and that government operates within a culture of transparency and fairness.”

But so what? Since CIHI is not ATIPable, an increase in getting access to information is meaningless.

Yet the Information Commissioner's website says we have a “Right to Know”:
"In a landmark Supreme Court of Canada decision in Dagg vs. Canada, Justice Gérard La Forest wrote:
'The overarching purpose of access to information legislation, then, is to facilitate democracy. It does so in two related ways. It helps to ensure first, that citizens have the information required to participate meaningfully in the democratic process, and secondly, that politicians and bureaucrats remain accountable to the citizenry."

So what do we know?

So how can Canadians “objectively evaluate their government's policy” on our any-time, any-reason, no-reason, taxpayer-funded abortion policy--when we don’t know how many tax payer funded abortions are done every year, how much we are paying for them, where they are being performed, what the gestational age of the babies being destroyed is, what the complications are, the type of abortion procedure, the age of the girl/woman, how many are repeat abortions, and the reasons for the abortions? And we aren’t allowed to ask abortion related questions to the very organization who is collecting the few statistics we do have?

Abortion reporting must again be made mandatory for all hospitals and all clinics. The responsibility for abortion collection must be returned to Statistics Canada.

Ask them what they mean when they say "Choice" 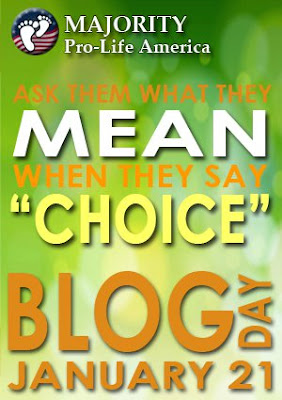 Ask them what they mean when they say "Choice"

Posted by Patricia Maloney at 6:00 AM No comments:

The fetus had no legal recognition capable of protection

In an interview with CBC’s Peter Mansbridge (about 5 minutes into the interview), Stephen Harper, when asked if his government received a majority in the next election, whether he would "reopen the abortion issue", responded:
"No, no, no. Look Peter, I've spent my political career trying to stay out of that issue. It's one on which people, including in my own party have passionate views, they're all over the map, and you know what I say to people...as you know, many people I know are pro-life...what I say to people, is if you want to diminish the number of abortions you've got to change hearts and not laws, and I'm not interested in having a debate over abortion law."

What a politically expedient thing to say.

It is true that the Conservatives have done a very good job on the economic and fiscal file. It would be disingenuous to deny this.

Mr. Harper might even get a majority. Imagine that.

But let's go back to his not changing the abortion laws comment.

We all know that the Supreme Court ruled in 1988 when they struck down Canada's abortion law (R. v. Morgentaler, 1988), that Parliament has the right to legislate protection for unborn children (e.g. Chief Justice Dickson said, "Like Beetz and Wilson JJ., I agree that protection of foetal interests by Parliament is also a valid governmental objective.").

Then in 1959, the Declaration of the Rights of the Child was adopted by a UN General Assembly Resolution 1386 (XIV).

The Declaration states in its preamble:
"WHEREAS the child, by reason of his physical and mental immaturity, needs special safeguards and care, including appropriate legal protection, before as well as after birth (emphasis added)".

In 1989 this declaration became a Treaty which Canada and all 10 provinces signed.

Here is a good discussion on this Declaration: The Issue of Fetal Rights in Canada written by Colleen D'Orsay Wintermans, student, Cape Breton University, November 25, 2005.

Ms. D'Orsay Wintermans says:
“The purpose of this paper to explore the issue of fetal rights in Canada. I do so from the perspective of the UN Convention on the Rights of the Child...In protecting rights of the unborn child to adequate care however, the [Canadian] Criminal Code seems to come up short. In an effort to avoid both the heated and oft politically volatile abortion debate and the rights of the mother to control her own body, no section of the Code exists that protects for the health and well being of the unborn developing child in utero. Section 223(1) of the Criminal Code says that a child becomes a human being when it has "completely proceeded, in a living state, from the body of its mother." In other words, the child has no protection until after birth (Byfield, 2002)... Until then, the fetus has no legal rights any more than, say, a pair of sneakers has legal rights. Therefore, the fetus had no legal recognition capable of protection. According to the courts, there is, simply, no one to protect (Bowal, & Wanke, 1998).”

We can and should “change the hearts” of people. But most Canadians also want some legal protection for the unborn. Our judges have said this, and the Declaration of the Rights of the Child has said this.

Mr. Harper will not reopen the abortion debate unless he is pressured into it by us.

So what can we do?

Write a letter to Mr. Harper and tell him you want legal protection for the unborn and you want this to be an election issue.
(Prime Minister pm@pm.gc.ca
Stephen Harper Harper.S@parl.gc.ca)

Write a letter to your MP and tell her or him you want legal protection for the unborn. Tell your MP that since they represent you in Parliament, you expect them to advocate for the unborn.
(MP email addresses)

It's up to us to speak up for legal rights for the unborn.
Posted by Patricia Maloney at 4:30 PM 2 comments:

Email ThisBlogThis!Share to TwitterShare to FacebookShare to Pinterest
Labels: abortion, CBC, Declaration of the Rights of the Child, fetus, Henry Morgentaler, Stephen Harper

The unborn: no life is so legally unprotected, and so frequently destroyed

Mr. Douthat notes the famous Clinton line, that said abortion should be "safe and legal, but also rare" isn't true when one in five pregnancies end in abortion. I read something else recently that made that same observation.

Abortion isn't rare because we have normalized abortion, we promote abortion and we celebrate abortion.

Douthat ends his article with this:
"This is the paradox of America’s unborn. No life is so desperately sought after, so hungrily desired, so carefully nurtured. And yet no life is so legally unprotected, and so frequently destroyed."
Posted by Patricia Maloney at 4:25 PM No comments:

During a recent posting of mine, Adoption instead of abortion, commenter "Ginny" said:
"pro-choice groups aren't opposed to women being informed”.

I've discussed this before, but it obviously bears repeating. Let’s start with the evidence of a link between abortion and breast cancer (ABC). In 2003, the National Cancer Institute conference concluded there was no ABC link. But one participant at that conference, Dr. Joel Brind (Ph.D., Professor, Human Biology and Endocrinology) disagreed. He said he was:
"convinced that the weight of available evidence suggests a real, independent, positive association between induced abortion and breast cancer risk."

Other studies that support the ABC link here.

In fact one of the researchers and organizers of that conference, Dr. Louise Brinton, reversed her position on the ABC link in January 09.

The Pro-choice Action Network reported in their so-called "expose" on crisis pregnancy centres that a fetus:
"cannot feel pain until at least the third trimester".

But there is lots of evidence that a fetus does in fact, feel pain at 20 weeks gestation and even before that. Dr. K.S. Anand is a world authority on research into pain perception in fetal and neonatal children. His study was published in the New England Journal of Medicine in 1987. At the Partial Birth Abortion hearings in the Southern District of New York in 2004, Dr. Anand testified that:
"the human fetus possesses the ability to experience pain by 20 weeks of gestation, if not earlier, and the pain perceived by a fetus is possibly more intense than that perceived by term newborns or older children."

Dr. Paul Ranalli, a Toronto Neurologist, in a public information meeting in Toronto, Canada in October 2008, sponsored by the deVeber Institute for Bioethics and Social Research agrees with Dr. Anand. Dr. Ranalli's talk is quite compelling--I suggest you listen to it and make your own conclusions on when a fetus feels pain here.

Pro-Can’s report also says:
"there is no evidence to suggest that women who have abortions experience any more or less sadness and regret than women who complete an unwanted pregnancy".

The report cites the American Psychological Association (APA) as one source. Andrea Mrozek, manager of research and communications at the Institute of Marriage and Family Canada, explains here why the APA research was flawed.

And here’s more research of the after affects of abortion here and here.

So to conclude, many “pro-choice” people are opposed to women being informed of all the information that would actually enable them to make a truly informed decision regarding having an abortion or not. Because if women were "informed" of this evidence, they might even change their minds and not have that abortion. And this would make a dent in the goal of the the pro-abortions’ continual and relentless promotion of abortion.
Posted by Patricia Maloney at 12:40 PM 8 comments: