Brian Gallant: the Charter made me do it

This is bad. Premier Brian Gallant of New Brunswick has just put the same foot in his mouth as Justin Trudeau did before him.

He actually said this:


"We have identified the barriers [to abortion] and are proceeding to eliminate them in order to respect our legal obligations under the Supreme Court of Canada ruling and the Canada Health Act regarding a woman’s right to choose.”

What legal obligations is he talking about? As Peter Ryan from New Brunswick Right to Life says:


“No law or Supreme Court ruling has ever stated that a province must provide abortion on demand. What’s going on is a pro-abortion ideology is being imposed upon New Brunswick. That’s wrong.”

I don't understand why these politicians get away with making stuff up about what the Charter says on abortion.

You'd think that even the pro-abortions would get queasy when politicians like Gallant and Trudeau say these things. It really doesn't do their already misguided philosophy any good when such falsehoods are propagated, and yet, they remain silent.

It's like they can't come up with any good reasons for our-any-time-any-reason-tax-payer-funded-abortion-on-demand, so they feel compelled to say "Well the Charter says so".

More on the anonymous blogger's witch hunt against CPC's.

Apparently the Ontario Trillium Foundation revoked the funds to the Pregnancy Options and Support Centre in Sarnia because Trillium:


"had an issue with the principles that were driving the umbrella organization: CAPPS.” and because "their revised policy now explicitly prohibits the funding of activities that seek to limit the legal rights and activities of Ontarians."

Trillium did this based on the word of one anonymous blogger.

What did this anonymous blogger tell Trillium to make them do this? What was the source of the information they used to base their decision to revoke the funds? Was the information vetted as valid, substantiated and factual? Because if it was, the grant money would not have been rescinded.

As a taxpayer funded Ontario group who dispenses with our money, one hopes that such serious decisions to revoke already granted funds is not based on information that in and of itself is grossly inaccurate.

Anyone who knows anything, knows that the Canadian Association of Pregnancy Support Services (CAPSS) would never seek "to limit the legal rights and activities of Ontarians." Except perhaps a cowardly anonymous blogger who has made their mission in life to destroy these CPCs whose work is to support women in crisis pregnancy situations. Maybe the anonymous blogger doesn't like women.

As I've already said, my guess is that Trillium probably received a copy of the National Enquirer-esque Scholarly Document (NESD) penned by pro-abortion Joyce Arthur called Exposing Crisis Pregnancy Centres in BC. A report that was replete with inaccuracies, hearsay and fiction.

Which is kind of ironic, when you remember that Arthur received a cool $27,400 for that piece of nonsense (that never was vetted as valid, substantiated and factual) from Status of Woman Canada. Money that she also never publicly acknowledged receiving, contrary to the rules of these grants.

I've now asked Trillium to tell me what they used to base their revocation of these funds. I've also asked them to read Brian Norton's own rebuttal of Arthur's report.

Trillium needs to base their funding decisions on hard facts and not on fairy tales concocted by people without a name.

Oh. And I also signed my letter with my real name.
Posted by Patricia Maloney at 4:44 PM No comments:

When anonymous pro-abortion bloggers write potty mouth outrageous nonsense, the best course of action is usually not to read said nonsense. (see here and here and see the Sarnia Observer who reported on it)

But when the nonsense goes on in a concerted and persistent fashion resulting in a witch hunt to destroy the reputation of Crisis Pregnancy Centres like the Pregnancy Options and Support Centre in Sarnia Lambton, to the extent of actually succeeding in having funding revoked by the Ontario Trillium foundation, well that's a different story.

Of course it's pretty easy to hide behind anonymity, and then delight in the harm caused, when you don't have the guts to stand up and behind your hateful words. Pretty easy indeed.

What I'd like to know is this. Did Trillium--an Ontario publicly funded organization AKA funded-by-you-and me--base their decision to revoke the grant to this CPC, on that National Enquirer-esque Scholarly Document penned by pro-abortion Joyce Arthur titled Exposing Crisis Pregnancy Centres in BC? Enquiring minds want to know.

And in the off chance you were ever actually fooled by the NESD through no fault of your own because you were in a state of hypnotic pro-abortion trance brought on by continued and repeated brainwashing by pro-abortion laughable misinformation campaigns--well I'll forgive you as long as you read the excellent factual rebuttal to that sorry piece of penmanship.

I intend to find out what happened here. Stay tuned.
Posted by Patricia Maloney at 4:51 PM 2 comments:

We shouldn't have to pay for what is hidden


"That damage [that the Liberal government is in no particular hurry to fix the fiscal mess in Ontario]— which will total almost $300-billion in accumulated provincial debt by the time the books are projected to be balanced — is substantial. Even if there are only smooth economic waters ahead for years to come, Ontario will struggle to compete while weighed down by that millstone. We hope that the province will one day have a government that realizes the enormity of this problem. We suspect it will have to wait at least four more years to get it."

For starters, why don't the Liberals defund abortion? How much money do we spend on abortion in Ontario you ask? Well we still don't know of course.

We do know that the Liberals could have spent as much at $70 million in 2010 on abortion, the last year that we have fairly decent statistics for.

As long as the Ontario Liberals continue to hide all abortion related information, we won't know what we're spending.

If the Liberals want to hide that information then we shouldn't have to pay for it.
Posted by Patricia Maloney at 10:38 AM No comments:

The value of human beings

Beautiful beautiful beautiful short film. Flaws and all. Even the pro-abortions should get it, and that has some merit. That is, if they are honest enough to admit it.
Posted by Patricia Maloney at 6:29 PM No comments:

These two articles on my Ontario Freedom of Information case disappeared from the Ottawa Citizen's website. I had hard copies so I scanned them and posted them. They are from 2013. 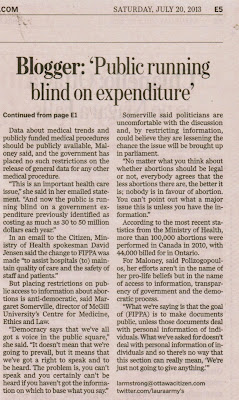 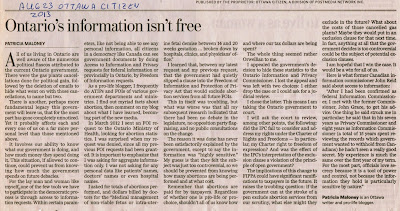 Posted by Patricia Maloney at 3:05 PM No comments:

How to jolt an apathetic public on abortion

Posted by Patricia Maloney at 12:10 PM No comments:

I received your brochure in the mail asking me to support your campaign.

If you hope to make the Conservative Party a party of inclusiveness, you might want to consider including those of us who are fighting for free and unencumbered access to information in Ontario. Right now this is not the case. I can't imagine a single Ontario resident who would be opposed to this right.