UNFPA says they do not promote or provide abortion services. According to ADF International, UNFPA does promote abortion.


'The discrepancy between the Agency’s designated mandate and actual activity is evident in the central focus of its programmatic and advocacy efforts—the fulfillment of ‘reproductive rights,’ which means abortion in UN parlance. Although the term is not explicitly defined as including abortion in any UN document, and appears in no binding instruments of international law, reproductive rights’ has been embraced by the pro abortion movement as the definitive term in support of a universal right to abortion. It was the ICPD that elevated the concept of ‘reproductive rights’ to international prominence and entrenched the term in the UN agenda. Even though it is not defined as abortion in the ICPD, and the document makes clear that abortion laws are to be decided by national legislatures, abortion activists were quick to co-opt the term, rendering it synonymous with abortion in the UN discourse. It is clear that ‘reproductive rights’ is considered the broad umbrella term under which all individual abortion-related terms fall, and as such is the most promoted phrase in the pursuit of the abortion agenda'


‘[L]et me say that Marie Stopes International is one of UNFPA’s most valued partners in the great work we are doing together.'

And also with abortion provider IPPF:


'The relationship between IPPF and UNFPA is deeply entrenched and dates back to their founding. In celebration of the 50th anniversary of IPPF, a UNFPA representative speaking on behalf of the Agency praised the abortion conglomerate, stating, ‘IPPF is a true pioneer in our field and is rightly known for its brave and angry spirit and going boldly where governments have feared to go’—the reference to governments a not-so subtle nod to the Agency’s proclivity for defying State sovereignty.'

ADF International did a very thorough job in their analysis of UNFPA and it's abortion ideology.

It seems that when President Trump reduced funding to UNFPA, Justin Trudeau stepped up his. On our behalf.
Posted by Patricia Maloney at 9:33 PM No comments:

2018 abortion numbers - are they going up or down?

CIHI has released 2018 abortion statistics. The numbers look like they're down from 2017, which is a good thing. But considering that CIHI doesn't report any abortions performed in doctor's offices; considering that not all clinic abortions are reported; together with the fact that an increasing number of abortions come from the easy availability of the abortion pill RU-486, we have no idea if abortions are really going down, or up. 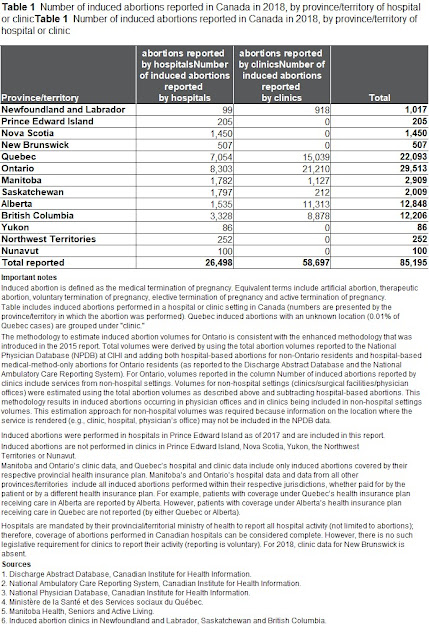 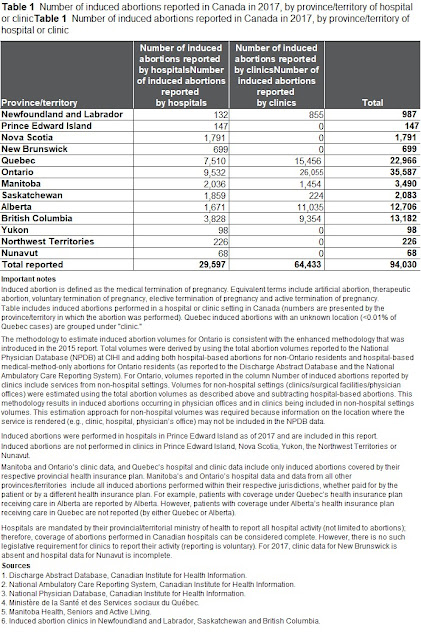 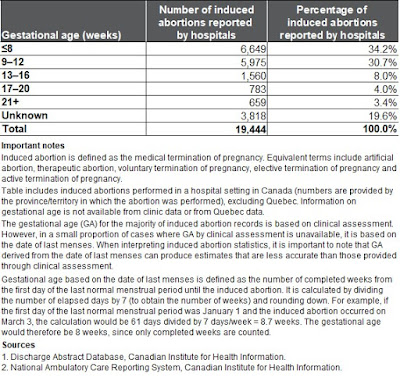 Posted by Patricia Maloney at 4:42 PM No comments:

Dear General Jonathan Vance,
I was taken aback to learn that the Canadian Armed Forces believes that pro-life people are right wing extremists in the same way that white supremacists, anti-Semitics, racists, neo-nazis, skinheads, and my favourite, the KKK, are.
https://thebridgehead.ca/2020/01/23/according-to-the-canadian-forces-pro-lifers-are-right-wing-extremists/ 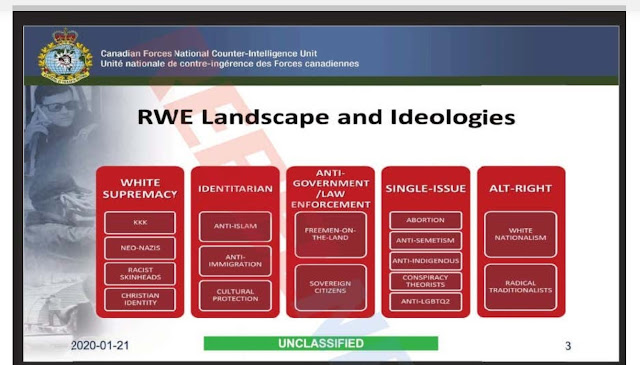 Have you ever attended the National March for life in Ottawa each year? No? I thought so.

Imagine 10,000 to 20,000 people marching peacefully through the streets of Ottawa, breaking no laws, while being shouted down by actual extremists, of the pro-choice and ANTIFA variety.
https://run-with-life.blogspot.com/search?q=march+for+life+2018

The reality is that if one wished to learn about actual extremists, one needs only investigate pro-choice extremists who regularly attack pro-life persons. I have assembled a few links FYI. This is by no means an exhaustive list. Why are these persons not on your list of left wing extremists, a group noticeably absent from your deck?

Finally, it is indeed ironic that our Canadian Armed Forces whose purpose is to defend our country, has abandoned the defense of its children still in the womb. This task has therefore been taken up by persons like myself. For taking it upon ourselves to perform this vital responsibility, we are branded right-wing extremists, along with the KKK and neo-Nazis.

It makes my head want to explode.


"Create new regulations for social media platforms, starting with a requirement that all platforms remove illegal content, including hate speech, within 24 hours or face significant penalties. This should include other online harms such as radicalization, incitement to violence, exploitation of children, or creation or distribution of terrorist propaganda."

This is unbelievable. Justin Trudeau actually wants to control the Internet. Did he learn this from China? Oh wait I forgot:


"The Liberal leader was asked which nation he admired most. He responded: "There's a level of admiration I actually have for China. Their basic dictatorship is actually allowing them to turn their economy around on a dime."

These new regulations will remove "illegal content" and "hate speech". By whose definition Justin? Yours?

And these new regulations should include the "exploitation of children." Sounds good, except for one problem. Trudeau says he doesn't want anyone to exploit children, but he fully supports the worst exploitation of children known to peoplekind: the intentional and direct killing of them while still in the womb. How does Trudeau square that circle?
Posted by Patricia Maloney at 4:11 PM No comments: