Covid-19 information on which vaccines use aborted fetuses

Some of the Covid-19 vaccines use aborted fetuses, and some use aborted fetuses in testing of the vaccine.
Information I have found so far:
https://www.lifecanada.org/no_mandatory_vaccine?fbclid=IwAR3ul0eop0lut7tMqVAoegGMgaSHWmRVrWe0JXoYsO7wmp0ZDQO7avjQ2DY
https://m.facebook.com/watch/?v=940331959809805&_rdr
https://s27589.pcdn.co/wp-content/uploads/2020/12/COVID-19-Vaccine-Candidates-and-Abortion-Derived-Cell-Lines.pdf
https://lozierinstitute.org/?s=COVID+19+Vaccines
https://cogforlife.org/wp-content/uploads/CovidCompareMoralImmoral.pdf
https://cogforlife.org/2020/11/16/moderna-covid-19-vaccine-facts-not-fiction/#more-18911
Here is a couple of cut and pastes from Children of God for Life who have extensive information on the vaccines.
These points are in the comment section of the article and are good short informative quotes on the vaccines currently available in Canada: Pfizer and Moderna.

"Pfizer/BioNTech was morally produced and contains no aborted fetal material. They did testing of the product on the HEK-293 cells but they are not part of the product, unlike the others listed in the red column on our website."

"The information on both Pfizer and Moderna is on our website here: https://cogforlife.org/wp-content/uploads/CovidCompareMoralImmoral.pdf The proof is linked to the science documents showing the data. The two vaccines do use the same technology – but one chose to do it morally (Pfizer) using adult donor cells and the other (Moderna) chose aborted fetal in the construct of their vaccine. However, they both tested their vaccines on aborted fetal cells."

"In the case of Pfizer, the HEK-293 cells were used only in the final testing, whereas Moderna used them in the research, development, testing and production of their spike protein. Pfizer on the other hand, created their protein using K562 cells from an adult female donor. The cells in both vaccines are NOT IN the final product. Both of the vaccines use mRNA technology which has never been used in any vaccines before."

"Both Pfizer and Moderna are using the mRNA technology. Pfizer did it morally (other than final testing) and Moderna did it immorally in their research, development, production and testing."

Here is another viewpoint on the current vaccines available (Pfizer and Moderna). The article is long but worth the read.

CONGREGATION FOR THE DOCTRINE OF THE FAITH

Bishops Strickland and Schneider are both against the Pfizer and Moderna vaccines.

In the end, each person must make their own decision to take, or not to take, the current vaccines available. I am hoping that before my turn comes to get it that I have a third option that did not use aborted cell lines in either the vaccine, or in its testing.

Posted by Patricia Maloney at 7:00 PM No comments:

The evil of abortion takes on newly exposed depravities

When it came to light that Planned Parenthood was selling aborted children for profit, there wasn't really a lot of discussion as to how the aborted body parts were used. Now we know -- and from the researchers themselves.

Planned Parenthood even called the videos from the Center for Medical Progress fake (and are now being sued for this libel). Another lie exposed.

This article documents three papers that document how the aborted children are being used. This is evil at its greatest.

There was a need for intact heads and body parts to be used, so that multiple body parts can be harvested and used in the same experiment.
If this is not diabolical, nothing is.
Posted by Patricia Maloney at 8:22 AM No comments:

Ontario abortion rates are going up

Ontario abortion rates as reported by the Ontario Ministry of Long-Term Care are going up. Yet CIHI shows a decrease in Ontario abortion rates. So I'm not sure why CIHI keeps reporting Ontario numbers. In any event, since the MOHLTC's numbers are based on doctor's billing records, they intuitively should be more accurate.

This disturbing trend upwards is most likely due to the abortion pill which became legal in 2017. This is really bad news for Canadians, especially those still in the womb. 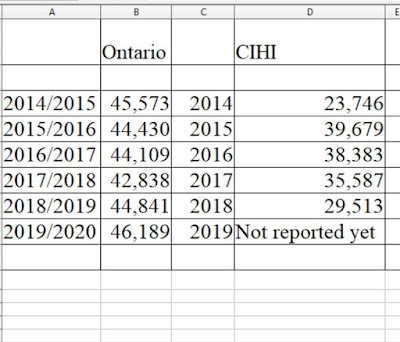 Ontario out of province abortions for 2017

Canadian abortion statistics: who does, and who does not, report medical abortions

UPDATE The facts about abortions statistics in Canada

Posted by Patricia Maloney at 1:36 PM No comments: