Who is lying - Kelowna Right to Life billboard or someone else? 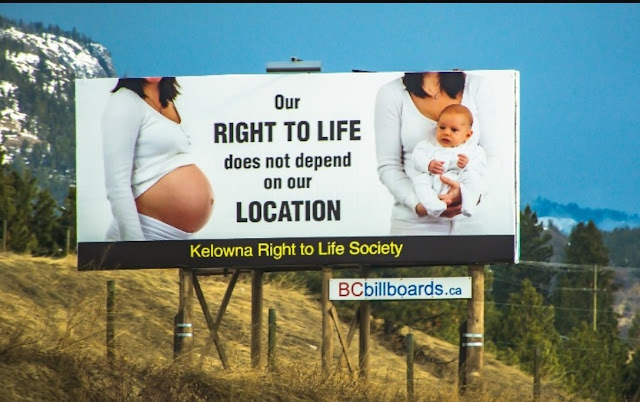 Joyce Arthur has some problems with this billboard and she wants people to complain to Ad Standards. She thinks the following statements are all false. They are not.

My comments in bold on each of her statements.

implying that most abortions happen around 16 weeks or later
(At least 5,048 later than 20 weeks, unknown how many were between 16 and 20 weeks)

making unsupported statements, e.g. “up to 25% of your friends, neighbours and relatives are likely missing” due to abortion
(in Canada in 2018 there were 385,777 live births. There are about 100,000 abortions in Canada each year. Looks to me like approximately 25% of pregnancies ended in abortion)

using the word “committed” rather than “performed”, to imply that abortion is illegal
(to commit: carry out or perpetrate (a mistake, crime, or immoral act).

implying that most abortions occur later in pregnancy by showing images of later-term fetuses
(5,048 is a lot of late term abortions)

claiming that "Canada has no abortion laws" when the 1988 R.v. Morgentaler decision that legalized abortion in fact stands as law as decreed by the Supreme Court, and abortion is regulated in other ways (such as through the Canada Health Act)
(there are no laws in Canada that provide any protection to the pre-born child)
Posted by Patricia Maloney at 8:31 PM No comments:

So I checked out to see what else I could find.

Found this from the Catholic News Agency


"The pope addressed Vatican officials, religious representatives, and members of international organizations participating in a March 7-9 conference on “Religions and the Sustainable Development Goals (SDGs): Listening to the cry of the earth and the poor.”


In his speech to conference participants Friday, Pope Francis praised the SDGs and 2030 Agenda as “a great step forward for global dialogue, in the sign of a necessary ‘new universal solidarity.’”

So exactly what is in this UN document?


"26 ...We are committed to ensuring universal access to sexual and reproductive health-care services, including for family planning, information and education...

5.6 Ensure universal access to sexual and reproductive health and reproductive rights as agreed in accordance with the Programme of Action of the International Conference on Population and Development and the Beijing Platform for Action and the outcome documents of their review conferences"

I am speechless.
Posted by Patricia Maloney at 7:57 PM 1 comment: