This is my final post in this five part series on Linepharma, who markets, distributes, sells and profits from abortion in over 25 countries, including Canada.

I've only documented a few of the adverse reaction cases from the 195 page ATIP package I received. You can view the other cases here from my Health Canada ATIP.

I cross referenced the 195 page report to the Canada Vigilance Summary of Reported Adverse  (43 records for MIFEGYMISO). Notice this from the first page of the summary report

"CAVEAT (from the report): This summary is based on information from adverse reaction reports submitted by health professionals and laypersons either directly to Health Canada or via market authorization holders. Each report represents the suspicion, opinion or observation of the individual reporter. The Canada Vigilance Program is a spontaneous reporting system that is suitable to detect signals of potential health product safety issues during the post-market period. The data has been collected primarily by a spontaneous surveillance system in which adverse reactions to health products are reported on a voluntary basis. Under reporting of adverse reactions is seen with both voluntary and mandatory spontaneous surveillance systems. Accumulated case reports should not be used as a basis for determining the incidence of a reaction or estimating risk for a particular product as neither the total number of reactions occurring, nor the number of patients exposed to the health product is known. Because of the multiple factors that influence reporting, quantitative comparisons of health product safety cannot be made from the data. Some of these factors include the length of time a drug is marketed, the market share, size and sophistication of the sales force, publicity about an adverse reaction and regulatory actions. In some cases, the reported clinical data is incomplete and there is not certainty that these health products caused the reported reactions. A given reaction may be due to an underlying disease process or to another coincidental factor. This information is provided with the understanding that the data will be appropriately referenced and used in conjunction with this caveat statement."

Lots of wiggle room there. Notice this statement:

"Under reporting of adverse reactions is seen with both voluntary and mandatory spontaneous surveillance systems." (emphasis added)

Presumably there are many adverse reactions that are never reported to Health Canada. How many? We will probably never know. But women who take this deadly pill are really on their own. They go home, take the pills, and who knows what consequences these women will suffer? And will they be reported?

Posted by Patricia Maloney at 4:15 PM No comments:

This report for a 36 year old woman who suffered from sepsis after a Mifegymiso abortion, bears a strong similarity to some of the other reports.

It contains a lot of unknown information about her case.

A 36-year old female patient, unspecified weight and height, with unknown medical history, was administered Mifegymiso...unspecified dosage for induced abortion. Time frame was unknown. Time of gestation was not provided.

Concomitant treatment was not reported.

Corrective treatment, if any, was not reported.

The patient recovered from the event on unspecified date.

More than one of these reports contain this lack of information. Why is that? Why isn't Health Canada following up with the person who reports the adverse reaction, to obtain this information? Isn't that a kind of crucial aspect of this reporting system?

Posted by Patricia Maloney at 4:02 PM No comments:

From her Adverse Reaction Report:

Patient presented for follow-up appointment with heavy bleeding and vasovagal (See below). Ultrasound scan detected retained product of conception in and around cervix that physician attempted to remove. An assessment of stat hemoglobin was ordered, then patient called at home to [be] given results at 130. A date for dilation and curettage was booked by clinic. Patient reported passed large clot size of an orange on way home and felt much better.

On [date], nurse called in the morning and patient said bleeding was only spotting and she felt better and cancelled dilation and curettage.

On [date], patient reported being admitted to hospital with hemorrhage and loss of consciousness on date with low hemoglobin and iron. She underwent emergency dilation and curettage and blood transfusion."

Notice the use of Retained product of conception. A human being by any other name.

"Vasovagal syncope (vay-zoh-VAY-gul SING-kuh-pee) occurs when you faint because your body overreacts to certain triggers, such as the sight of blood or extreme emotional distress. It may also be called neurocardiogenic syncope.

The vasovagal syncope trigger causes your heart rate and blood pressure to drop suddenly. That leads to reduced blood flow to your brain, causing you to briefly lose consciousness."

Posted by Patricia Maloney at 4:11 PM No comments:

"Linepharma is a pharmaceutical company committed to improving sexual and reproductive health through expanding access to safe medication abortion."

Further to my last post about the company whose only product kills babies, I did an ATIP to Health Canada on the abortion drug Mifegymiso. My request:

I am still waiting for the first part of my request, and received info back on the second part about adverse effects.

The first woman I will discuss who suffered from this dangerous drug was 17 years old. There are records for her from 2017, 2018, 2019 and 2020 in the system. I have no idea how long she suffered from her abortion, but there was a lot of paper work done on her.

Her case was classified as serious, life threatening.

This woman suffered the following horrible reactions to this drug.

This case was flagged as off-label use because:

Interesting that 63 days number. Because from this Canadian Medical Abortion Dispensing Guide it says up to 70 days. So what is it Linepharma, 63 days or 70 days? And how do you make sure that women don't take it past this time like this girl did?

On one of the reports was the following comment.

Linepharma took a 21 full months to retrieve the information about this poor girl. You'd think that they would be a tad more interested in knowing about this horror story. And the other horror stories of women taking this dangerous drug. That they produce, market, make money from, and send around the world.

How many people in countries not as advanced as Canada suffer from similar reactions? And what will happen if we start sending Mifegymiso to Africa? God only knows.

Posted by Patricia Maloney at 5:01 PM No comments:

Improving women's health one abortion at a time

Linepharma makes the medical abortion drug Mifegymiso. It is distributed in Canada by Celopharma.

Linepharma seems to be owned by a holding company AMRING HOLDING SA.

I couldn't find much about these companies, besides some basic information about their registrations etc, and their own very non informative websites. In fact Amring Holding SA doesn't seem to have a website of its own. Interesting.

Linepharma distributes this product through the usual suspects, International Planned Parenthood, Marie Stopes, and United Nations Population Fund, and other stalwart organizations devoted to the killing of young fetuses.

Currently Linepharma sells their fatal fetal drug to women in Canada, Latin America, Asia, and Australia. And coming soon it will be in Japan, Chile, Bolivia, and South Korea.

We can only imagine how much money they make in their monopoly of medically killing children in the womb all over the world. If this isn't evil I have no idea what is.

Posted by Patricia Maloney at 4:40 PM No comments:

Why low numbers for medical abortions in Quebec

The medical abortion numbers in Quebec I reported last time appeared to too low, so I asked RAMQ:

The response I received:

I don't speak French, so according to Google translate:

"The tables available online regarding reimbursements granted under the Free Universal Access to The Voluntary Termination of Pregnancy Drug Program provide data on Mifegymiso™ (abortion pill) given to a community pharmacist following a consultation in a medical clinic to a person insured under the public drug insurance plan. The Régie does not hold any data concerning Mifégymiso™ received in a health facility. We find that few insured people go to medical clinics when they are considering a medical abortion. Indeed, they seem to favour institutional services. This is likely due to the low number of reimbursements for Mifegymiso™ in community pharmacies."

I will attempt to find out what the numbers are for health facilities.

Posted by Patricia Maloney at 3:54 PM No comments:

Justin Trudeau: Don't believe in science, are racist and misogynist

I am embarrassed for you.

There are people in Canada who have decided, for their own reasons, not to get the Covid vaccine. Not only have you insulted them and treated them like pariahs, but it seems your know better attitude simply knows no bounds at the extremes you will stoop to, with your ad-hominem attacks.

Do you understand any of what I am saying? Do you care even a little bit for the people in this country who you do not agree with? Are you capable at any level of respecting millions of people who live, work, and raise families in Canada? Do you not know that your views and pronouncements are deeply divisive and harmful to millions? Do you care at all about the people you represent?

I am embarrassed for you. I do pray for you. I think God knows how much you need prayers. I hope you know as well.

Posted by Patricia Maloney at 5:05 PM No comments: 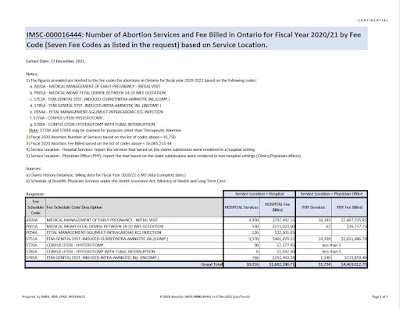 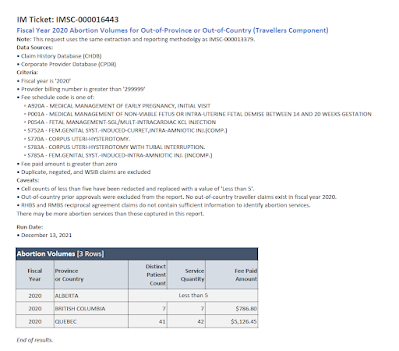 Posted by Patricia Maloney at 4:41 PM No comments: 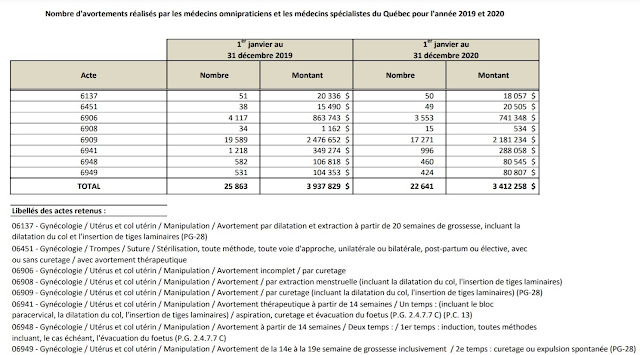 Gestational ages of Quebec abortions compared to the rest of Canada's (according to CIHI): 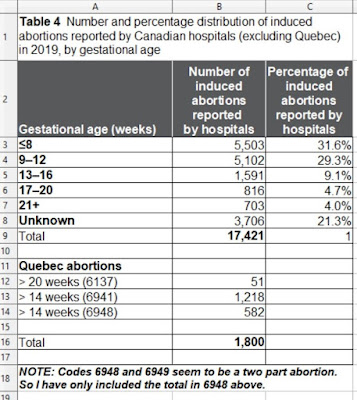 Information on medical abortions in Quebec. 538 in 2019

06137 - Gynecology / Uterus and cervix / Manipulation / Abortion by dilation and extraction from 20 weeks of pregnancy, including cervical expansion and laminar rod insertion (PG-28)

06451 - Gynecology / Tubes / Suture / Sterilization, any method, any route of approach, unilateral or bilateral, postpartum or elective, with or without curettage / with therapeutic abortion

06949 - Gynecology / Uterus and cervix / Manipulation / Abortion from the 14th to the 19th week of pregnancy inclusively / 2nd time: curettage or spontaneous expulsion (PG-28)