Well Ireland has picked up on this worrisome fact and has some worries of their own:


"Concerns were raised to the Canadian prime minister, Justin Trudeau, over claims made in the Oireachtas..."

"Abortion is not criminalised in Canada and is governed under the same laws as other health procedures. Anti-abortion campaigners in Ireland have claimed that the liberal law has led to terminations where the foetus was still alive after the procedure."

Rónán Mullen, the independent senator, claimed on the record of the joint Oireachtas committee considering repeal and replacement of the Eighth Amendment that in Canada “botched abortions have taken place in recent years and where children were alive after the procedure”.

Mattie McGrath, the independent TD, has made similar claims and Cora Sherlock, a spokeswoman for the Pro Life Campaign, has said that there were more than 400 babies in the last ten years “born alive in botched abortions and left to die alone” in Canada. "

SOGC was not able to respond to the allegations:


“The SOGC is not aware of cases where there is evidence of any dereliction of duty, and therefore we are not able to respond to the allegations that you refer to in your email,” he said."

And Stats Canada could not "support or refute" Ireland's concerns about these born alive abortions:


“There is nothing in the data that would support or refute the characterisation of these events as ‘botched abortions’ or the assertion that these infants were ‘left to die alone in hospital corners’,” Statistics Canada said in a letter.

Here is an update on Canada's born alive abortions. These abortions are coded P96.4, "Termination of pregnancy, affecting fetus and newborn".

1) After you go to the link above, click on "Add/Remove data".

2) Go to "Step 4 - Select: Cause of death" and click on "All" twice (the first click all causes of death to be ticked, and the second click removes all causes). Then scroll down towards the bottom and click only on "Termination of pregnancy, affecting fetus and newborn [P96.4]"

(UPDATE: I realized that I included 2009 in both calculations. If we ignore 2009 in this most recent calculation, it would be a total of 299 for four years for an average of  74.75 born alive abortions per year) 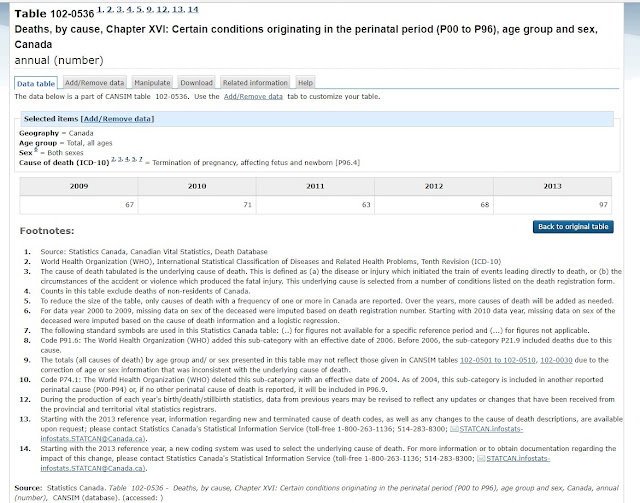 Posted by Patricia Maloney at 12:09 PM