Harper or Obama: who would you choose?

There are two ways to be "pro-choice". The first is the Barack Obama way. The second is the Stephen Harper way.

The way Mr. Obama does it, is the in your face approach. There can be no doubt about where Mr. Obama stands on "women's rights". He is not even against partial birth abortion. And neither is Mrs. Obama.

This is what Mr. Obama said regarding the Born Alive Act, a bill that requires doctors to give care to babies who survive abortions. In the audio Mr. Obama argues against a law that would require another doctor to come in and save the baby if it's viable.

(Also notice he has some trouble with what to call the born child, calling it a fetus):
"That if that fetus, or child, however you want to describe it, is now outside of the mother's womb and the doctor continues to think that it's non viable but there's lets say movement or some indication that they're not just coming out limp and dead that in fact they would then have to call in a second physician to monitor and check off and make sure that this is not a live child that could be saved?"

In fact Mrs. Obama actively campaigned for her husband in 2004 calling partial-birth abortion “legitimate” medicine:
“The fact remains, with no provision to protect the heath of the mother, this ban on a legitimate medical procedure is clearly unconstitutional and must be overturned.”

Mr. Obama also cozies up to International Planned Parenthood. So much so, that the White House actually produced a video on Youtube where he thanks IPPF.

Now we come to the Stephen Harper way of being pro-choice. Where does Mr. Harper stand on abortion? Well, he's never said that he supports abortion. He's also never said that he's against abortion. (Though I did find this quote in 2002 where he says he's "moderately pro-life". Whatever that means). Ever since of course, Mr. Harper has refused to discuss abortion in any way shape or form.

Even though Mr. Harper won't talk about abortion, his actions clearly tells us he is pro-choice.

For instance, in the fall of 2008, Mr. Harper conveniently called an election, killing the Unborn Victims of Crime Act, Bill C-484, which had previously passed the Second Reading vote in the spring of 2008 (Note: all bills die when an election is called). Then Mr. Harper voted against Roxanne's Law against coerced abortion (Bill C-510). Next Mr. Harper voted against study to look at when life begins (Motion 312). And finally, Mr. Harper tells us his government will vote against a Motion against sex-selection abortion (Motion 408).

At least Obama is up-front about where he stands on abortion, he supports a "woman's right to choose" and says so. Mr. Harper just zippers his lips. But if you aren't against something, you're for it. So Mr. Harper is pro-choice.

If I had to choose between the two "pro-choice" strategies, I'd choose Mr.Obama's any day. At least we know what we're up against.

For so long Social Conservatives thought Mr. Harper was pro-life and just waiting for that majority, which he got, yet nothing changed. Except maybe, Mr. Harper dug in his pro-choice heels a little bit deeper.

I have only one question I'd like to ask. We all know that behind every great man stands an even greater woman. This is certainly true of the Obamas, the Clintons, and others. What about the Harpers? Is the great woman behind Mr. Harper the driving force behind his irrational refusal to discuss abortion? Interesting question, n'est ce pas? 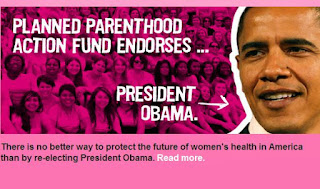 Posted by Patricia Maloney at 3:36 PM