Should a charity that receives millions of dollars in taxpayer funded grants, be in the business of advocating for the repeal of Charter rights of pro-life organizations?

This is what Sandeep Prasad of Action Canada for Sexual Health and Rights is trying to do. He wants to take away our Charter right to protest abortion.


"Every May, anti-choice protesters arrive in Ottawa for the "March for Life" -- the largest demonstration against the right to choose.

This year, COVID-19 has cancelled this in-person event, like many others. But what will it take to cancel the "March for Life" for good?"

Since April when I last wrote about this pro-abortion organization, I learned that this goup received an additional $11 million dollars in new grant money. This brings their total grant money to date to over $14 million.

(It's not the first time this group has had a campaign against pro-life people. See also here and here). 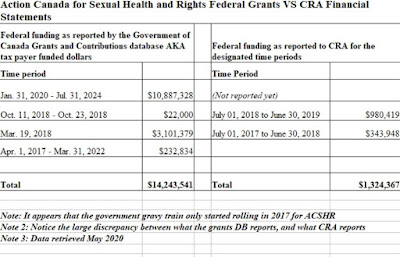 (Notice the large discrepancy between what the government reports as grants to them, VS what they reported to CRA.)

Action Canada also has almost $2.5 Million in assets, including almost $1.5 million in the bank. Not bad.

Salaries for the people who advocate for abortion in this so-called "non-profit" are pretty lucrative as you can see.

These people eat a steady diet of going after pro-life groups. And they can do it because they receive millions of dollars in funding from Canadian taxpayers, including pro-life people.
Posted by Patricia Maloney at 11:29 AM