I continue to try and understand why the accuracy of abortion statistics in this country are so pathetic. I contacted CIHI to get more clarifications about their numbers.

As we already know CIHI's data sources are here:


When I compared the numbers in the National Physician Database (number 3 above) I learned that these numbers are very different from CIHI's quick stats (which is what everyone uses for yearly abortion numbers). 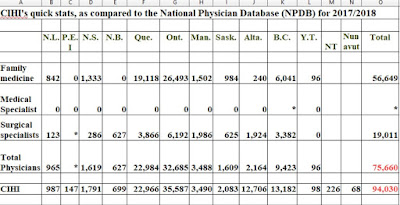 So I asked CIHI to explain the difference between the two sets of numbers, since the quick stats use a bunch of sources, and the NPDB uses only one source?

Here is the response I received from CIHI:

"CIHI’s annual induced abortion tables report on abortion volumes in Canada. It includes data on hospital-based abortions submitted to national databases (e.g. DAD, NACRS), in addition to clinic data that is voluntarily provided to CIHI. These tables also include NPDB data as a source for Ontario to estimate the volume of non-hospital abortions.

The NPDB annual release includes NPDB data only, with the goal of national reporting on payments to physicians and services provided. The “utilization” data tables that report service volumes are based on fee-for-service data only. Services provided under alternative forms of reimbursement (e.g. salary and capitation) are not included.

In addition, different methodologies are used to identify abortion volumes between the two reports (Canadian Classification of Health Interventions, CCI, for hospitalization data, vs Fee for service billing codes in NPDB).

Given these differences, there will be expected differences in volumes."

Shouldn't fee for service data be more accurate? Why isn't it? Why do they need to obtain the data from so many different places? Then have to use methodologies to get something resembling accurate stats? Why not just make the reporting for abortions performed mandatory and insist every province provide that info?

One can only imagine the gyrations CIHI goes through to come to numbers that they hope to, but never actually achieve, be accurate.
Posted by Patricia Maloney at 4:42 PM