In October 2017 I sent a freedom of information request to the Attorney General of Ontario, Yasir Naqvi.

This is what I asked for:


“Information the ministry possess about the need for abortion bubble zones.”

Six months and $552.50 later, I received some information. (There was a lot of redacting based on the large gaps between page numbers.)

In the package was Jim Watson's request to the AG for an abortion bubble zone. And his so-called analysis of its need.

Conspicuously missing from Watson's request, was the police report I obtained from the Ottawa police that revealed that there were no charges and no arrests at the Morgentaler facility in Ottawa in a three and a half year period, information that would not support the need for an abortion bubble zone.

Also missing from Watson's request, was abortion doctor Wendy Norman's own 2012 study on Canadian facilities that shows how little harassment is actually happening at abortion sites:


"Facilities reported very little harassment (Table 4). No Canadian facility reported a resignation of an abortion provider–physician or any staff member owing to harassment. Only a single facility reported any resignation of an allied health professional staff member, and in this case the facility specified that the one resignation was not owing to violence, fear, or threats. Similarly, two-thirds of reporting facilities (49 of 74, 66.2%) indicated no episodes of harassment or violence in 2012, with a further 28.4% (21 of 74) reporting solely picketing without interference. Among 7 facilities reporting “other” episodes of harassment, half specified only receipt of harassing e-mail."

Once again this information would not support the need for an abortion bubble zone.

What Watson did include in his submission, was a 2010 report done by the extremist abortion lobby group Abortion Rights Coalition of Canada headed up by the radical pro-abortion Joyce Arthur.

Who could have predicted that?

Watson even went so far as to cut and paste Arthur's "benefits" of an abortion bubble zone in his report: 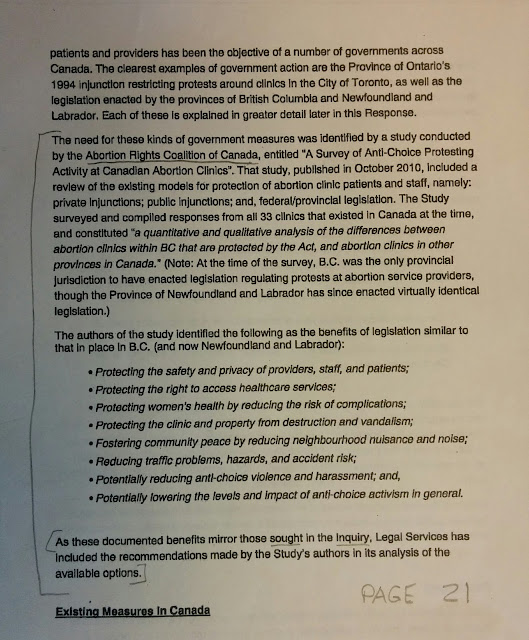 Jim Watson and his tax paid civil servant lawyers want to "lower the levels and impact of [pro-life] activism in general". How is that for staying non-partisan from the mayor of Ottawa and his bureaucrats?

Then in both Watson's analysis and conclusion, he again refers to his pro-abortion mentor. 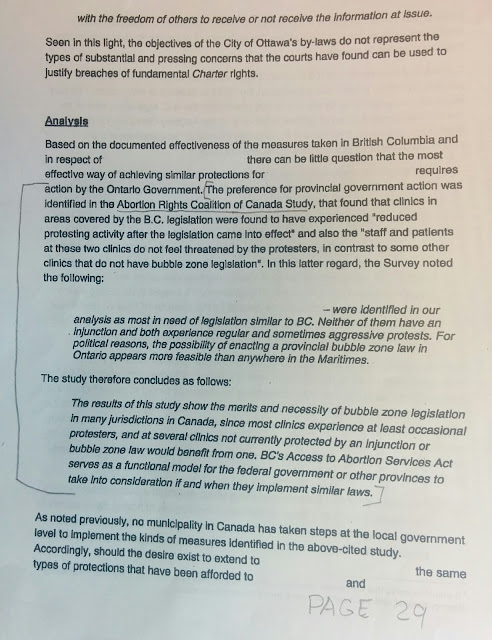 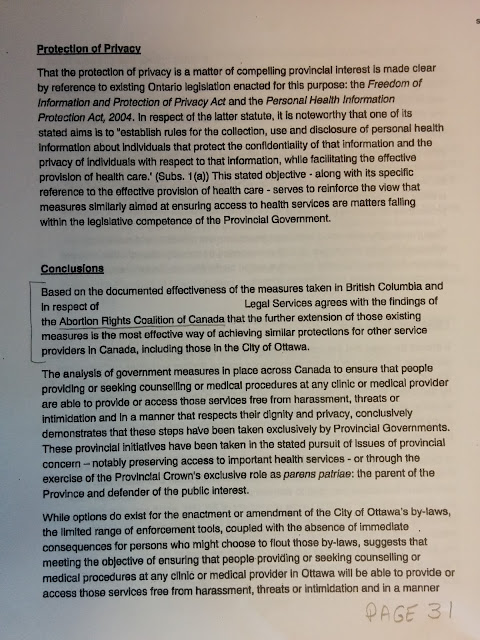 Watson includes a report from a radical pro-abortion group to support the results he wants, then purposely excludes two objective reports that would not support an abortion bubble zone.