Below I've transcribed emails I received from my city of Ottawa FOI, regarding the pro-life flag mess.

They tell the story of how the pro-life flag received authorization to be flown at city hall, for last year's March for Life.

You may recall that Mayor Watson blamed the flag mess on the fact that the bureaucrats approved the flag.

This may be so, but as you will see below, the request originally came via email and was addressed to both Mayor Watson and Councillor Mathieu Fleury. Fleury even spoke to the requester.

It seems that somehow the request was handled by the bureaucrats who by the way, clearly have a close relationship to the mayor. All you need to do is look at their positions:


Why didn't Watson or Fleury refuse the request when it first came in? Do they not read their email?Fleury clearly did, because he even spoke with the flag requester. Instead they took the flag down, after it had gone through (we must assume) the proper channels and only when the excrement hit the fan with the pro-abortions screaming bloody murder did Watson cave.

It also seems that Fleury, who spoke to the flag requester, even told him that his request was being considered. The next thing we know Fleury throws the requester under the bus when he signed that horrid proclamation against the flag.

Nice way to treat your constituent. 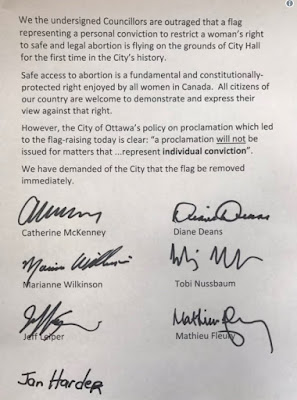 Mayor Greg Dionne of Prince Albert Saskatchewan a strong believer in freedom of speech and freedom of rights has flown the life flag in his city. Ottawa has a variety of flags, as a taxpayer I respectfully request that this flag could be flown also for the 20th anniversary of the March for Life here in Ottawa. Please advise if this request could be granted. Attached flag going up in Prince Albert.

Monday May 01, 2017 at 1:06 PM
Another message came into the city via their website. The message says this:


"Spoke to Matthew Fleury this AM about a reply to my request to Mayor Watson, I received a reply it would be under consideration. Mr. Fleury advised me it would be your department. Would appreciate a reply ASAP."

Tuesday May 2, 2017 9:17 AM
Email from Communications Officer, Mayor's Office to Executive Assistant to Mayor Jim Watson

Tuesday May 2, 2017 11:07 AM
Email from Executive Assistant, Mayor's office to Protocol Advisor


"This is the request that we received yesterday through Councillor Fleury's office. Councillor Fleury told the gentleman that we will give consideration to his request however raising the flag is very controversial. In having to reply to this request I need your guidance."


"Can you see if we are proclaiming the day; if we are, it would be difficult to deny the request. We can discuss at our one-on-one tomorrow.


"I will bring this forward tomorrow. A proclamation has been issued and sent to the organizer."


"Attached is the flag as per your request."