Below are numbers for late-term stillbirth and livebirth abortions (Code P96.4 "Termination of pregnancy, affecting fetus and newborns") from CIHI for 2013/2014.

I reported on this information previously here and here for 2010/2011.

It's important to note that there are two different outcomes for these late-term abortions coded with P96.4 "Termination of pregnancy, affecting fetus and newborns". Some of the babies were delivered stillborn (780). And some were delivered alive (161).

Notice that Quebec reports neither stillbirths nor livebirths for code P96.4, so we have no idea how many are being done in Quebec. Last time I did receive numbers for the livebirth abortions for Quebec but not for the stillbirth abortions. CIHI told me this is because:


"Quebec data is not included. As part of the Agreement between the Government of Quebec and the Canadian Institute for Health Information (CIHI), the data transmitted by Quebec and held by CIHI may only be used for the mandate given to CIHI by Quebec. Therefore, CIHI is not authorized to provide you with the requested data for Quebec."

When I asked for clarification on this,CIHI said:


"Data transmitted to us by a jurisdiction still belongs to the jurisdiction in question. We are authorized to provide Québec’s aggregate data or information only when the request falls within the mandate in the agreement between CIHI and the Government of Québec. Media requests do not fall within the mandate."

As for the livebirth abortions, we can assume that at least some of these babies were probably aborted because of serious fetal abnormalities, as reported in this National Post story at 5 months gestation.


"many hospitals make it a policy to first terminate the fetus in-utero, perhaps using lethal injection... Dr. Wendy Norman, a clinical professor at the University of British Columbia, confirmed in an email to the Post that abortions “performed intentionally in major centres for pregnancies over 20 weeks would almost certainly include a technique … to induce fetal demise PRIOR to the delivery of the fetus.”

If what Dr. Norman says is true, this would mean the child would die before it exited the mother's body, which means it would not be classified as a livebirth abortion. Yet these current stats confirm doctors are still performing abortions resulting in livebirths, so what is going on here?

I suspect that some of these babies are born alive because they are not giving the baby the injection first to stop its heart. But I am only guessing.

In fact all we have is speculation, since there are no reasons attached to any of these deaths. Are these livebirth babies tossed aside and left on their own, struggling to survive until they die? Are they done on compassionate grounds so the mother can hold her child before the child dies? If so, then why isn't the child allowed to be born at term and placed in perinatal palliative care? Is it because we don't offer perinatal palliative care to pregnant women in these difficult situations? That would be true compassion. And if we don't offer this option, why not?

And why won't Quebec let us see their livebirth abortion stats? If I could speak French I would request the information from the Quebec government through access to information.

What we do know about these babies who are subject to late term abortions, is that some of them are born alive (161), then they die. What are the reasons for these abortions? Why are the numbers increasing?

And of course CIHI is not ATIPable, so whatever CIHI won't divulge is completely hidden from us. If the data still resided with Statistics Canada, I could do an access to information request and ask to see this agreement with Quebec. But I can't do that with CIHI. 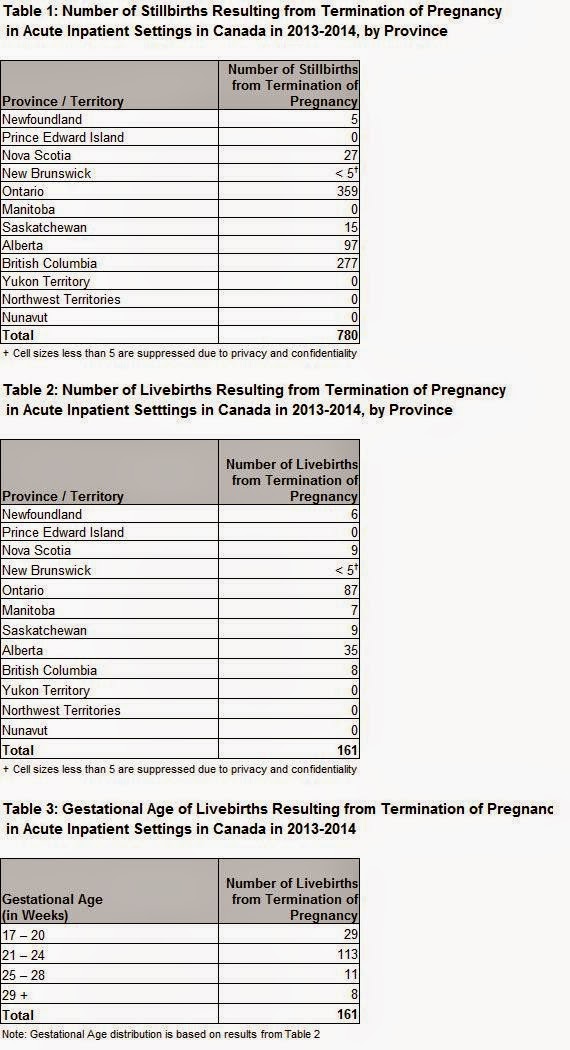 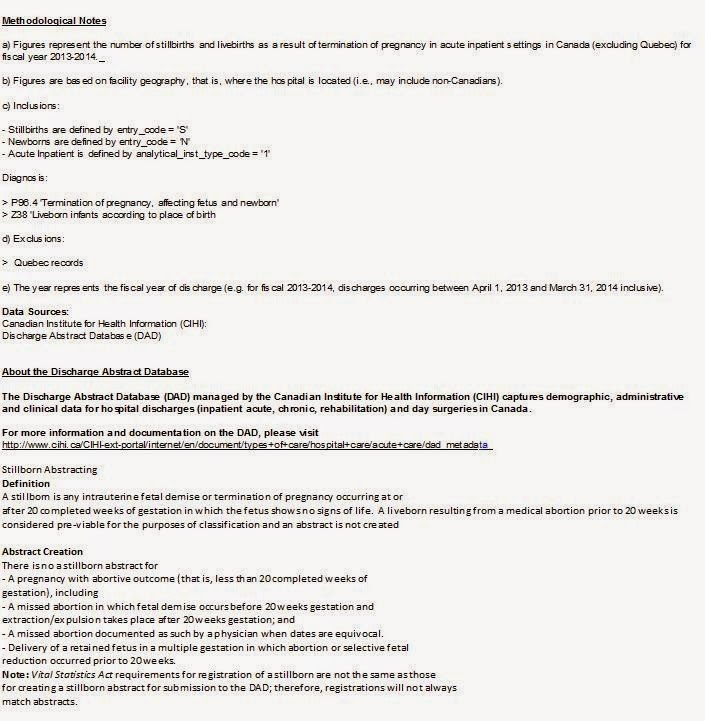 Posted by Patricia Maloney at 2:07 PM