I think the timing of Maurice Vellacott's Motion 490 is perfect.


M-490 would change the votability process for Private Members' Business through amendments to the Standing Orders of the House of Commons.

Mr. Vellacott wrote this in his backgrounder on Motion 490:


Examples of how the current votability determination process has failed

The most recent and obvious example was Mark Warawa's Motion 408 in 2013. Mr. Warawa appealed the PMB Subcommittee's non-votability ruling to the PROC committee. The members of PROC, which upheld the subcommittee's decision, conducted their deliberations behind closed doors--even MPs who had attended the meeting as observers were told to leave.

I have been compiling the results of my most recent ATIP to the PCO on that very Motion of Mr. Warawa's.

I had asked for all correspondence from the public and from the media, to Prime Minister Harper, regarding Mark Warawa's motion 408.

In other words, I was looking to see how much support there was for Motion 408.

What I learned, was that the Prime Minister received a total of 699 individual emails/letters. Of these 699 letters, there were only two letters against the motion.

Without putting too fine a point on it (pun intended), that means that only point three percent (.3%) of Canadians were against Motion 408.

In one of that large number of against-the-motion letters, the letter writer simply provided the Prime Minister with some of Joyce Arthur's usual pro-abortion nonsense on the subject. 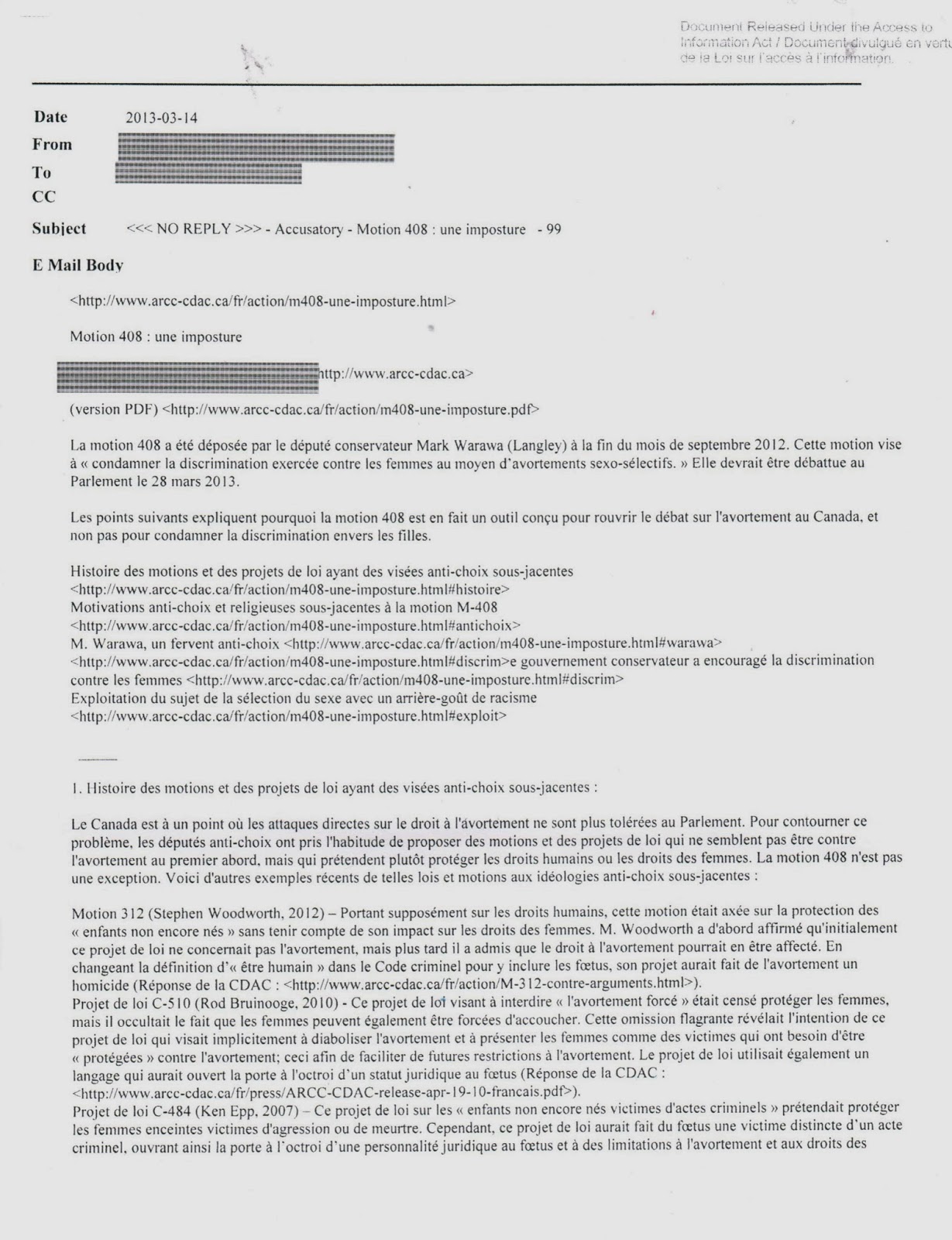 Just one day after Minister Ambrose finally acknowledged that the majority of Canadians have no interest in debating abortion, the Canadian Press is reporting that (text blacked out) used House of Commons letterhead to request that the RCMP investigate any abortions performed after 19 weeks in Canada as possible homicides.

Not only do these MPs pretend ignorance of Section 223 of the Criminal Code, which excludes a fetus from the definition of human being in relation to homicide law, they implicitly challenge the constitutionally protected right and freedom of women to choose to have safe, legal abortions.

I note, too, that House of Commons time has been taken up with numerous anti-abortion petitions since the defeat of Motion 312, and that, if legislative experience in the U.S. on the matter of a ban of sex-selective abortion serves as an indicator, more time will be taken up in defeating the equally unwanted Motion 408.

When will the government shut down the useless and tremendously costly anti-abortion lobbying such as (text blacked out) currently wallow in?

I look forward to your response.

The PMO responded with this:

Please know that your e-mail message has been received in the Prime Minister's Office and that your comments have been noted. Our office always welcomes hearing from correspondents and being made aware of their views.

Thank you for writing.

To which the outraged letter writer responded:

Excuse me, I asked the Prime Minister to respond to my question: When will the government shut down the useless and tremendously costly anti-abortion lobbying such as (text blacked out) currently wallow in? He has not responded. Will he kindly respond?

So why doesn't the Prime Minister listen to the majority of Canadians? Why is he instead listening to only two Canadians? Is this the kind of people Mr. Harper is getting his advice from?

If it is, then I think Mr. Vellacott's newest Motion is just the thing we need.
Posted by Patricia Maloney at 2:46 PM