Update: Live birth abortions on the rise in Canada; also some abortions reported as stillbirths

Stillbirth statistics from Statistics Canada (SC) are shown in Table 1 below. The stats refer to babies of at least 500 grams or at least 20 weeks gestation. (1)

Stillbirth statistics published on-line CANSIM table 102-4514 do not separate natural stillbirths from abortion stillbirths, so I asked SC to separate them out for me. I asked for years 2000 to 2010 (11 years). I compiled their four pages of statistics into the one table you see below, Table 1.

I have already reported on SC live birth abortions here.

Stillbirth and livebirth abortion statistics from CIHI are shown in Table 2 below. This data was for fiscal year 2010/2011 (For one year only. Also note that their on-line annual published tables are produced by calendar year and not fiscal year.)

There were 727 stillbirth abortions reported by CIHI for that one year 2010/2011. SC reported that there was an average of 420 per year (4624/11 years for 2000-2010). That is a big difference. So I asked SC to explain the discrepancy between their data and CIHI's data. Their complete explanation is below.

Regarding live birth abortions: I believe it is possible that the live birth abortions reported by SC/CIHI may be over and above CIHI's annual published abortions because of what SC told me here:
"On the very rare occasion when an induced abortion might result in a live birth (and possibly subsequent death) these cases may or may not be included in the Therapeutic Abortion Database. The Canadian Institute for Health Information, however, instructs hospital coders to identify a birth rather than an abortion in this situation, thus such cases would not be counted in the Therapeutic Abortion Database. It is unknown whether private clinics would still report an abortion if the outcome of the abortion procedure was a live birth."
(This paragraph forms part of the reply I received from SC, the full text appears below.)

As you can see, the 119 live birth abortions reported by CIHI for the year 2010/2011 is much higher than any of these previous reported years from SC.

I interpret this to mean that some unknown number of stillbirths reported as "other underlying cause" could, and probably are, late term abortions (or code P96.4, termination of pregnancy). Recall that there are many abortions reported by CIHI that are of unknown gestational ages, see here and here.

The question we can't answer is, how many of these stillbirths with “other underlying cause” are in fact late term abortions?

Below is the full text of the response I received from SC in an email dated November 20, 2012 regarding the discrepancy between the data between CIHI and SC.

You may interpret it differently than I did.

"It is normal that the vital stats would be lower for various reasons. 1) The TA numbers up to 2003 include Quebec data. 2) Although an induced abortion was performed, the “underlying cause of death” may not have been certified/coded as a termination of pregnancy. 3) Reporting stillbirths resulting from a termination of pregnancy has not been done consistently over the period of observation.

I have been asked to address the questions you raised in regard to the scope and coverage of the Therapeutic Abortion Database.

It is possible that an induced abortion event can be included in the Therapeutic Abortion Database as well as in the Vital Statistics Stillbirths database (or even very rarely the Vital Statistics Birth and Death databases.) The following paragraphs describe the definition and registration of stillbirths, especially those resulting from termination of pregnancy.

Statistics Canada's statistics on stillbirths are obtained from an administrative survey that collects demographic information annually from all provincial and territorial vital statistics registries on all stillbirths (late fetal deaths) in Canada. Some data are also collected on stillbirths to Canadian resident women in selected American states.

Stillbirth is currently defined as the complete expulsion or extraction from its mother of a product of conception, which did not at any time after birth breathe or show other sign of life. Any product of conception that does not show signs of life and meets the reporting requirements, must be registered as a stillbirth under provincial and territorial vital statistics acts. In 2001, most provinces and all three territories required a stillbirth with a gestational age of at least 20 weeks or a birth weight of at least 500 grams to be registered. In Quebec and Saskatchewan (and New Brunswick prior to November 1996), only stillbirths weighing at least 500 grams were required to be registered, regardless of the gestational age. Until 1997, a gestational age of at least 20 weeks was required for stillbirths to be registered in Prince Edward Island, regardless of the birth weight.

In all provinces and territories except for New Brunswick, a fetal death that results from an intentional termination of the pregnancy would be registered as a stillbirth if the fetus met the definition in terms of its gestational age and/or birth weight. New Brunswick does not register fetal deaths that result from intentional termination of the pregnancy as stillbirths even if the fetus would otherwise meet the definition for a stillbirth. Statistics Canada compiles stillbirth statistics on all registered stillbirths for which data are received from the provincial and territorial vital statistics registries, regardless of whether the stillbirth resulted from a spontaneous or intentional pregnancy termination.

The registration of a stillbirth uses a different registration form than that which is used to register a death, although both forms have some common elements such as the cause, whether an autopsy was held, and the designation of the certifier. Statistics on births, stillbirths, and deaths are reported separately. There are editing procedures at both the provincial / territorial and at Statistics Canada to ensure that there are no duplicate records: a fetus born dead is registered as a stillbirth; one that is born alive and later dies, appears in both the birth and death statistics. In either of these situations the fetus may have been extracted from the woman by an induced abortion. Statistics for abortion, however, are based on hospital or clinic reports, the requirements for these are separate and different from those required under the vital statistics acts. On the very rare occasion when an induced abortion might result in a live birth (and possibly subsequent death) these cases may or may not be included in the Therapeutic Abortion Database. The Canadian Institute for Health Information, however, instructs hospital coders to identify a birth rather than an abortion in this situation, thus such cases would not be counted in the Therapeutic Abortion Database. It is unknown whether private clinics would still report an abortion if the outcome of the abortion procedure was a live birth.

In summary, a termination of a pregnancy of at least 20 weeks gestation can feasibly be included in both the Therapeutic Abortion Database and the Vital Statistics Stillbirth database. On the very rare occasion that the outcome of an induced abortion is a live birth (and possible subsequent death), the abortion event is highly unlikely to be included in the Therapeutic Abortion Database, but will appear in the Vital Statistics Birth and Death databases.

Footnotes:
(1) Stats Can defines “stillbirth” as follows: “Fetal death (stillbirth) is death prior to the complete expulsion or extraction from its mother of a product of conception, irrespective of the duration of pregnancy; the death is indicated by the fact that after such separation the fetus does not breathe or show any other evidence of life, such as beating of the heart, pulsation of the umbilical cord, or definite movement of voluntary muscles. Only fetal deaths where the product of conception has a birth weight of 500 grams or more or the duration of pregnancy is 20 weeks or longer are registered in Canada.” (from footnote 2 of CANSIM table 102-4514) 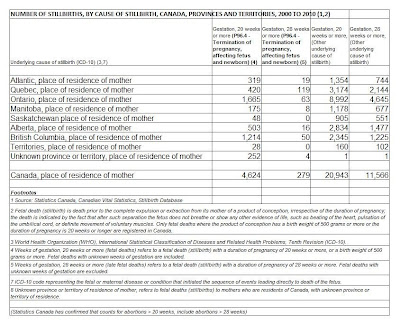 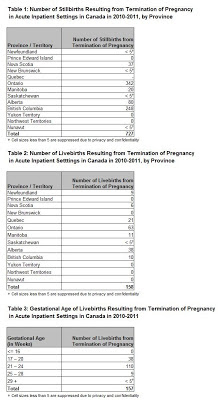 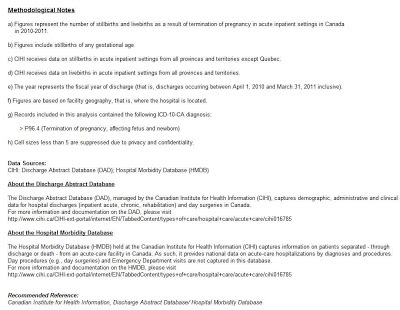 Posted by Patricia Maloney at 1:47 PM