UPDATE March 3, 2020
My question to AHS regarding their statistics, and their response:
Q. Can you explain why your stats are consistently lower than those stats reported by CIHI?
A. There are two reasons
1.       Difference in Data source (We use Claims and CIHI uses inpatient/outpatient data).
2.       Difference in methodology (We restrict any claims with 60 days as one abortion) but am not sure about CIHI (You can confirm with them).

I received abortion statistics from Alberta Health Services (AHS) through a freedom of information request. I then compared these numbers to CIHI's numbers. As you can see, AHS's numbers are less than CIHI's. This was a surprise since both Quebec and Ontario's numbers are higher than CIHI's.

But notice the footnotes.

From CIHI data:
So abortions covered by AHS, but done in Quebec, aren't reported anywhere.


"Mifegymiso prescriptions were introduced in July 2017 which affected abortions numbers for the last two fiscal years."

Once again we have confusion over abortion statistics. 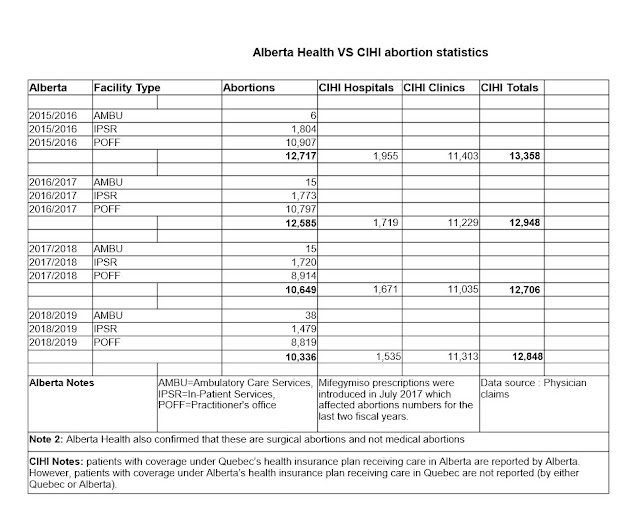 Posted by Patricia Maloney at 7:02 PM