"In regards to your request, you, and all persons are free to pray at this site while respecting the bubble zone and any other legislation that may be in effect that respects your right and the rights of others.

This is a sad and disturbing story about how pro-life people in Canada are treated. We are used to being treated badly by pro-abortion people; to being marginalized by the media; to being thrown under the bus by politicians. But this is a story of police harassment of pro-life people. One of whom is a 90 year old man who calls himself a pro-life warrior.

Frank Barrett signed up for the first 40 Days for life peaceful pro-life vigil, 11 years ago. This is where people stand in silent witness and prayer in front of the abortion killing places. Originally the vigils were held around the clock, and Frank would witness for two hours in the middle of the night.

By his own words Frank says:


“I prayed and put this time in to thank God for my health, my wife, and my family. I've continued every Tuesday since then for all these years, across the street from 65 Bank St. and even continued outside the Bubble Zone until this date.”

Here is more of what what Frank told me.

On Tuesday, Oct 1, 2019, around 2:45 he was praying with his sandwich board on the corner of Bank & Queen outside the abortion bubble zone (in front of CIBC see picture below).

A police van pulled up in front of McDonalds beside 65 Bank St. Frank assumes the Officer went into 65 Bank St, then came out and watched Frank from there for a time.

Then a second police car parked behind that van, and two officers watched him for a time then came over and stood behind him. They said nothing.

Frank turned and asked the police officers if there was a problem. One officer said he was breaking the bubble zone law and wanted to see Frank's identification.

(Note: a person in Canada can still stand and pray anywhere he or she likes without producing a permit or identification. Can't they?)

The officer didn't bother to read the permit. The six others who were with Frank praying, were also asked to produce their identification. Frank felt like he was being bullied.

Frank then told the officers they did not know what they were doing. They then called their sergeant.

Another officer arrived and now there were three police officers, with three police vans with all their lights flashing,

These were seven peaceful pro-life people (one in a wheel chair), praying; outside the bubble zone; in a supposedly free and democratic society. And this is how they are treated.

Frank thought that it must have looked like they were bank robbers.

Then the sergeant spoke to the two officers and asked Frank to stand out of earshot, which he did. The sergeant then left and Frank then asked the two policeman “So what now?”

Their answer? “You can stay here for now”. (thanks for that). Then the officers left.

Here is the final kicker. When Frank went to submit his own police report to the Ottawa police, they had no record of any of this. They even tried to discourage Frank from making a report. But he did report the incident.

Frank received a confirmation of his report and was given a case number and told it could take up to 6 to 8 weeks for them to get back to him.


“We are committed to having a highly ethical police service, to obtain public trust and maintain public confidence that we are an honourable, courageous and service-oriented police service.” 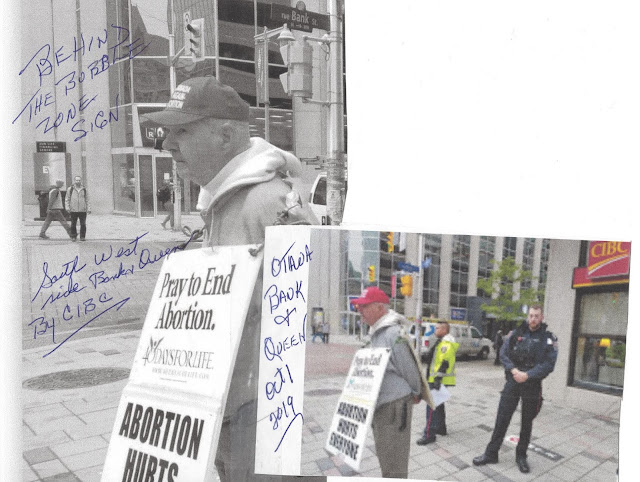 Posted by Patricia Maloney at 3:27 PM