Interesting debate last night at Colonel By high school for Ottawa-Vanier candidates. I thought all the candidates did fairly well. Not too sure though about the Marxist-Leninist candidate, couldn't quite understand him and his thoughts weren't overly coherent.

There were a lot of the left leaning persuasion persons in the room and they seemed to applaud a lot for the NDP, Liberals, and Green parties. But it definitely wasn't a crowning of Belanger as I had feared.

There was some disruptive laughing/snickering/rudeness going on when Conservative David Piccini was speaking about how his party is allowed to vote with their conscience. I know that Harper controls his MPs pretty tightly, but really? Isn't it both the Liberals and NDP who don't even allow people into their party who are pro-life (and so never even get to vote their conscience) and NOT the Conservatives?

My take away from the debate is that I found the NDP and Green candidates were both quite strong, especially the NDP's Emilie Taman. Hopefully this will translate into taking away votes from Liberal Mauril Belanger who is well past his best before date. 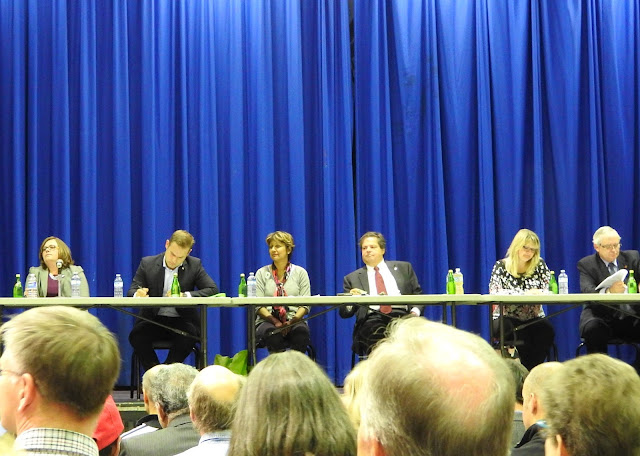 Posted by Patricia Maloney at 8:13 AM