Confessions of a pro-life bigot

Today I learned that I am a bigot. HJHORNBECK says so, because I am pro-life. So it must be true:


"When you tolerate bigots, they find safe harbour with you. And if the Conservatives regain power, Harper will find it harder to keep them under control…"

According to the Merriam Webster dictionary, a bigot is


"a person who hates or refuses to accept the members of a particular group (such as a racial or religious group)".

I must admit I'm confused though. Because if I am a bigot, what does that make Justin Trudeau, who refuses to accept pro-life people as members of his Liberal party?

So today this bigot, and her bigoted sister Maureen, went out to deliver flyer's in our riding of Ottawa-Vanier. Liberal Mauril Belanger has held this riding for 20 years. Time for a change I say. We're tired of having an MP who is pro-choice and whose party refuses to accept pro-life people as members of said Liberal party.

We've now delivered about 300 flyer's. We will continue to deliver flyer's until election day. Bigots that we are. 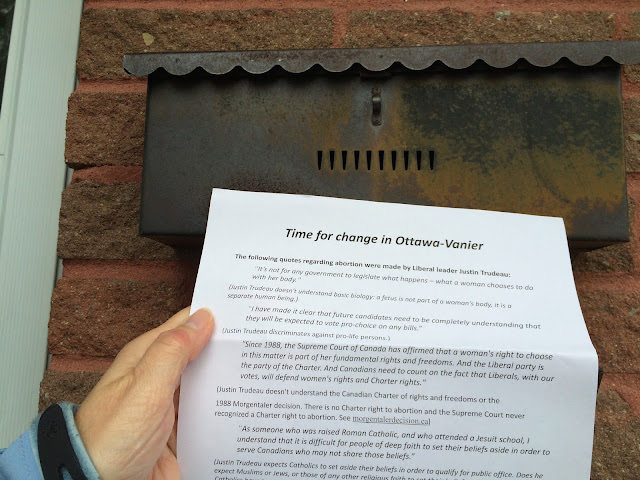 Posted by Patricia Maloney at 3:49 PM