The hidden cost of abortion in Ontario

(This article appeared in the Fall 2012 issue of Canadian Physicians for Life, Vital Signs)

In January 2012, the Ontario Government quietly shut down access to all information on abortion services. This was accomplished by an amendment to the Freedom of Information and Protection of Privacy Act (FIPPA), as part of Bill 122: An Act to increase the financial accountability of organizations in the broader public sector. (1)

This is the clause that was added to the Act:


Why was this change made?

There are two background stories that will provide the answer to this question.

First. Officially, the Ministry of Health and Long Term-care (MOH) stated that the clause was added because "Records relating to abortion services are highly sensitive and that is why a decision was made to exempt these records". (2)

This statement is disingenuous since as numerous writers have already pointed out, all kinds of medical services are "highly sensitive", but are still subject to access to Freedom of Information rules. So why was this the only medical service singled out?

The more plausible reason for the change is that due to previous access to information requests made by this writer, we were discovering very high numbers of abortions being performed in Ontario, numbers much higher than being officially reported by the Canadian Institute for Health Information (CIHI). In fact, these FOI requests (based on OHIP billings and not hospital records like CIHI uses) were identifying abortion numbers a full 53% higher than CIHI's numbers. (3)
(Note: CIHI statistics do not include abortions performed in private physician's offices. As well, it is voluntary for clinics to report data.)

CIHI reported 28,765 abortions in Ontario for 2010 (4), while my FOIs had hit 44,091 abortions and was about to climb again with my latest request for service code P001: "Medical management of non-viable fetus or intra-uterine fetal demise between 14 and 20 weeks". However this FOI request was denied because of the exclusion clause added to FIPPA in January.

Second. The group Echo, which is funded by Ontario tax payers, put together a so-called "Abortion Expert Panel" to study abortion access in Ontario (5). By their own admission, the panel was comprised of only pro-choice experts (6). This biased tax funded group advocates for more access to abortions, and for more access to second trimester abortions (7). Echo also lists these pro-abortion resources as sources of information:

If a government is paying abortion experts to advocate for increased access to abortions, then it's agenda will be derailed if access to information requests divulge the inconvenient truth that Ontario is already performing far more abortions than officially reported.

Our best numbers to date are that 44,091 abortions were preformed in 2010. With an average cost of $1,600 (8), that's $70,545,600 Ontario taxpayers spent destroying preborn children in 2010 alone. So in a time of fiscal restraint when expenditures are being slashed and doctors and teachers are being asked to reduce their salaries, it would become increasingly difficult to explain to the public why we need to pay more to an already lucrative abortion industry.

The solution to this dilemma was to ensure that all abortion information--the numbers of abortions being performed; the types of abortions; and their escalating costs--was hidden from public scrutiny.

If we don't know how many abortions are being performed we remain ignorant--and quiet--about the cost of those abortions.

Below are the numbers of procedures done for specific Service Codes/Diagnostic codes for 2010. This is the kind of information that we will be prevented from obtaining in the future because of this change to FIPPA.

A couple of additional notes on the Echo reports:

1) There is a contradiction in Echo's literature regarding short-term abortion complication rates. In three (5, 10) of the four Echo reports it states that "Abortion is a safe procedure with less than a 1% complication rate".
Yet in the Case Scenario report (7, 9), the percentages for short term complication rates are actually much higher at 6.95% to 8.05%.

2) Echo also recommends that: "Sexual and reproductive health topics, abortion counselling, and abortion procedures are part of the core content of medical and nursing schools’ curricula and supported by core education in medical ethics. Practical training is provided to medical students and primary care practitioners".) 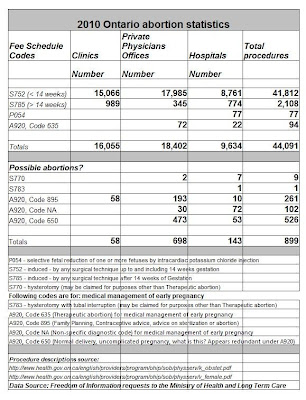 Posted by Patricia Maloney at 4:03 PM