A challenge to the media in Canada 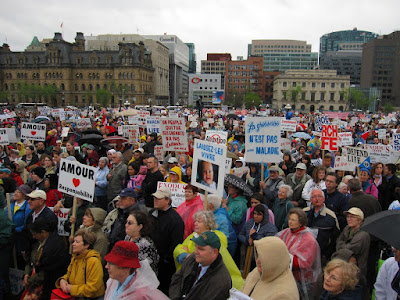 "If polling tells us anything about Canadians' attitude to abortion, it’s that they are overwhelmingly troubled by it, but deeply divided over what to do. In view of this lack of consensus, a case can be made that the government’s decision is entirely consistent with the feelings of Canadians on the subject, especially since that decision does not prevent individuals from supporting an international pro-abortion agenda if they so choose....like Planned Parenthood are perfectly able to raise money on their own and spend it as they please, without government interference. The fact that they don't - or can't - raise private money despite in many cases having charitable status, is a strong indication of how little Canadians actually support their agenda. This is an important aspect of the overall story, yet a search of the record could not find a single report that includes it. Not one."

If our media could put their own possible biases on the back burner for one day, I have a challenge for them. Why not come out this year and witness thousands of peaceful, respectful people, of all stripes, colour and age, who march every year in the annual March for Life this Thursday May 13?
Last year there was virtually no media coverage and there were at least 12,000 soaking wet marchers.

This would provide a single glaring, not to be misunderstood snapshot of our lack of consensus on the legal accident that created fully-funded, any-time, any-reason, no-reason abortion in this country.

Posted by Patricia Maloney at 12:58 PM