Update on Francis Barrett being carded by Ottawa Police

"After watching me from across the street (in front of 65 Bank) they [the police] came across the street, stood behind me (see picture below), said nothing for a couple of minutes until I turned and said, is there a problem? That is when he [one of the police officers] said you're breaking the bubble zone law. I said your joking, can't you see the sign right beside me? Don't you know were the bubble zone is?" Francis Barrett

It is abysmal how pro-life people are treated in Ontario.

First we were prevented from praying in front of the abortion site with the abortion bubble zone law. This forced Fr. Tony Van Hee to bring a Charter Challenge against the government for this discrimination.

Now Francis Barrett has been carded.

He first complained to the Ottawa Police about the treatment he and others received at the abortion site (outside the bubble zone). After multiple meetings, phone calls, emails, and four months of waiting, Mr. Barrett never received an apology for his treatment.

He then complained to the Office of the Independent Police Review Director (OIPRD). The OIPRD is an "independent" group in charge of complaints against the police:


"OIPRD is responsible for receiving, managing and overseeing all public complaints about municipal, regional and provincial police in Ontario. As an independent civilian oversight agency, we make sure that public complaints about police are dealt with in a manner that is transparent, effective and fair to both the public and the police."

What did the OIPRD do with Mr. Barrett's complaint? They dismissed it:

Not 'transparent'. Not 'effective'. Not 'fair'.

Even though these peaceful pro-life persons, acting within the law, were asked for ID for no reason, and subsequently intimidated by the Ottawa Police, the appeal was dismissed. (The OIPRD reports to the Attorney General's office. How can an appeal board be independent when they report to a government bureaucracy?).

Mr. Barrett was also told that there is no other appeal, and that his only other recourse was to go to Judicial Review, ie, go to court. All he wanted was an apology for their behaviour. They wouldn't give him one.

(When I had my own Charter Challenge with the Attorney General, the judge who ruled against the AG for hiding abortion information actually noted that the only recourse a citizen has in these circumstances, is to go to court. That this was unfair. We see this exact same behaviour today: A citizen must go to court--at great personal expense--to get justice in Ontario against the AG and its army of highly paid lawyers.)


"the officers were acting in their authority in checking the permission of the group to be there."

So I asked. What authority is that? They refused to answer my question.


"The circumstances outlined in his complaint do not suggest that the police were engaging in that prohibited activity at the time they requested his identification."

The police were definitely engaging in a prohibited activity. It's called carding.

None of these conditions apply here. Again I asked, which of these was Francis Barrett and his small group of seniors doing that required this harassing behaviour?

To add insult to injury we have this:


"the police have a discretion as to the nature of the identification that they may accept, and absent evidence that police exercised the discretion improperly, it is unlikely that an investigation would result in grounds to believe misconduct occurred."


"it is unlikely that an investigation would result in grounds to believe misconduct occurred."

The OIPRD is actually admitting here that they didn't even bother to investigate Mr. Barrett's complaint. Presumably they just unilaterally decided it wasn't valid. Prejudice: 'preconceived opinion that is not based on reason or actual experience'.

Peaceful protest in Ontario is only allowed if you are not pro-life. 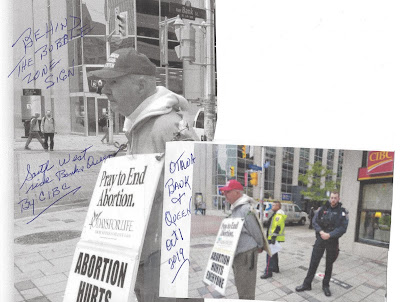 Posted by Patricia Maloney at 5:01 PM