Infant of Prague - we pray for Justin Trudeau

While buying my Christmas stamps today--and I mean by that stamps that actually have a Christmas picture on them and not some red cup like Starbucks is doing this year--I met a lovely 81 year old Lebanese lady by the name of Alba.

She wanted to send a picture to Justin Trudeau. Her picture was neither packaged nor did she have the address of the House of Commons. Stephen the Canada Post clerk was trying to help her, but was slightly frustrated with her when I happened upon the scene.

I offered to him, that if he just wrote the House of Commons on the package (which he also had to provide, and graciously did so), and that if he had access to the internet, I was sure he could find the postal code. He did, and he even packaged it all up for Alba and wrote the requested address out for her.

Her picture also included a hand written note to Trudeau.

Alba was happy to talk to me about her gift to Trudeau. In her very broken English she told me that the picture was a photograph of an embroidery she had done when she was 23 (she couldn't remember what the name of the picture was, but my sister informed me that it was the Infant of Prague.)


"The devotion to the Holy Child Jesus has long been a tradition of the Catholic Church for a very long time. This devotion is a veneration of our Lord's sacred Infancy. Many saints had a very strong devotion to the Divine Child, notably St. Therese of the Child Jesus, St. Francis of Assisi, St. Anthony of Padua, and St. Teresa of Avila.

Prague is the capitol city of the Czech Republic, which is at the very central of Europe with Germany, Poland, Russia and Austria as its neighbours. The history of the Infant Jesus of Prague started in the 17th century when a statue of the Infant Jesus was brought into Bohemia (now Czech Republic) and eventually was given to the Discalced Carmelites in Prague. Since then, the statue has remained in Prague and has drawn many devotees worldwide to go and honor the Holy Child. Many graces, blessings, favors and miraculous healings have been received by many who petitioned before the Infant Jesus."

Alba told me that the legend associated with the picture, was the more you gave Jesus, the more he would give you in return. From the link above for Catholic Culture:


"As the devotion to the Infant Jesus spreads throughout the world, many parishes now offer Holy Mass and novenas to honor the Holy Child of God and many prayer groups have been formed. Jesus has kept His promise that the more that He is honored, the more that He will bless them. This is truly evidenced by the many favors He has granted to those who ask Him."

She also had pictures of the original photograph that she used to create the embroidery (see picture below). And she told me when she first saw the picture it reminded her of her sister who died at the age of two. That is why she felt compelled to embroider it back when she was 23. Now she wanted to share this very personal memory with Justin Trudeau.

Considering Justin Trudeau's pro-abortion edict against pro-life persons, I think this gift is very fitting. I just hope Trudeau has the good sense to put it on his desk. 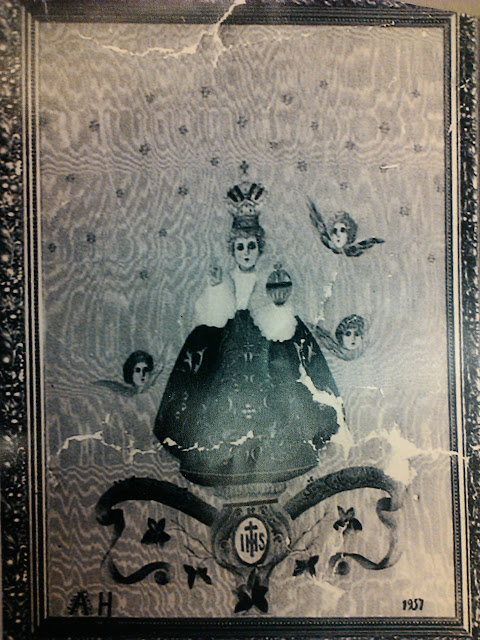 Posted by Patricia Maloney at 1:19 PM