Putting an end to abortion

The pro-abortions hate it when we bring morality into the abortion debate. Their comeback is usually the forgettable "Against abortion? Don't have one." This week's We want the Debate poster puts that line in its proper perspective.

I think the topic of morality makes pro-abortions queasy. Like, what if there really is something morally questionable about destroying a little defenceless human being, for no other reason than it's my self given right to do so?
To assuage their icky feelings, they may read something from a hard line pro-abort, like "the only moral abortion is my abortion", with the hope that this will ease their conscience. I wonder if it actually does?
Over time, I suppose, they may convince themselves that abortion is perfectly okay, that it doesn't harm the woman at all. And the unborn child, what do they think of her?
The thing is, what do the pro-abortions think the criminal code is based on, if not morality? Don't murder, don't steal, don't rape. The list goes on.
So why are we against abortion? Because abortion hurts a woman, it hurts her family, it hurts society and it hurts a child. There are better ways for a woman to deal with an unplanned pregnancy, like getting support from a crisis pregnancy centre, or putting the child up for adoption. Why is it that the pro-abortions never talk about adoption?
Thank goodness we finally put an end to slavery.
We will put an end to abortion too. 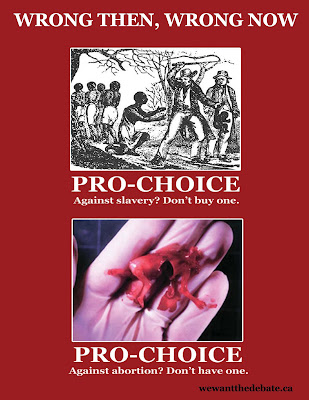 Posted by Patricia Maloney at 5:58 PM

Email ThisBlogThis!Share to TwitterShare to FacebookShare to Pinterest
Labels: pro-abortions, We want the debate