Pro-abortion group mean-spirited and judgmental towards people of faith

Joyce Arthur and friends have been on quite the rampage against pro-life groups and Christian groups who receive money from the Summer Jobs program.

Arthur's campaign comes along with some cartoonish graphic pictures. But what isn't funny, is the deceptions and misinformation perpetrated by Arthur's campaign. (See here for Arthur's previous false allegations against crisis pregnancy centres.)

Arthur has even taken it upon herself to report 44 of these SJP recipients to CRA. I'm pretty sure if CRA found any evidence of wrongdoing, they would deal with them--as they should. But I wonder what CRA might do if they decided these accusations were false, vexatious and maybe worse? And this isn't the first time Arthur has contacted CRA. In 2016 she reported several crisis pregnancy centres to CRA. 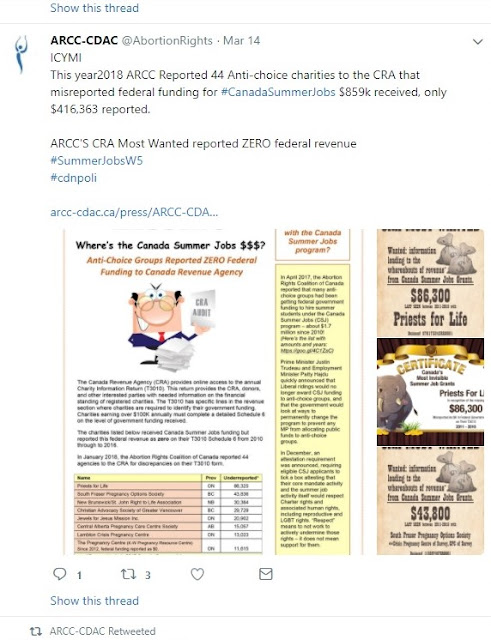 ICYMI ("in case you missed it"--I had to look this up). Is Arthur for real? She's been tweeting this nonsense for over a month now, non-stop. How could anybody miss her unabated attacks on these charities? (Except those charities like the Christian Advocacy Society of Greater Vancouver who are too busy doing the good work they do and don't have time to be worrying about Arthur's unfounded allegations.)

Anyway, I was wondering if these organizations were even aware of Arthur's campaign. So I contacted a few of them, and they were not aware.

You can read here the response I received from one group: the Christian Advocacy Society of Greater Vancouver.

In this letter, Brian Norton, Executive Director, responds to all of Arthur's questions/allegations. In particular he addresses her allegation that these groups discriminate against trans people:


"ARCC implies online that we may oppose “trans rights” and the LGBTQ community.

Our charity is not political, we are pastoral. Unlike ARCC, we are non-discriminatory.

In contrast to what ARCC is surmising, the clients we are entrusted to serve come from all lifestyles, gender identities, and sexual orientation. Coincidentally, two of our most recent sexually abused clients are transgender people. (Emphasis added)

The following value statement is from our Commitment of Care and Competence:

For some reason Christian Advocacy Society of Greater Vancouver is particularly disliked by Arthur. I wonder why. Could it be because Arthur is jealous of the good work they do--they build up while she tears down?
Posted by Patricia Maloney at 7:16 PM