Now we learn that there are four born children who he doesn't seem to care about either.


"My ex-husband, Saren Azer, abducted our four Canadian-born children in August 2015 after taking them on what was to be a two-week holiday in Europe. I had tried to block the trip. But the Canadian courts overruled my mother's instincts and allowed the children to travel abroad with him. He never brought them home.

Within days of the abduction, Interpol issued a "wanted person" Red Notice for Saren and a "missing persons" Yellow Notice for my children. But they're not missing anymore. We know where they are. Saren has illegally taken them back to the country where he was born, Iran. The Canadian government knows this too.

In the early days of the abduction, I believed in the Canadian system. I believed that our police, our judiciary, our elected officials, wouldn't abandon Canada's youngest and most vulnerable. I was sure they'd take forceful action to locate my children and demand their return. How naive I was.

What I have learned from talking to others who have endured similar ordeals is that governments need to intervene at the highest level. Iran wants international legitimacy and to be taken seriously. Canada has great credibility. It's time to use it.

What Prime Minister Trudeau needs to do is to pick up the phone call President Hassan Rouhani.

Mr. Trudeau, you can bring my children home. Please get personally involved and use the power of your office to save the lives of Sharvahn, Rojevahn, Dersim and Meitan. And though it matters much less, in saving their lives, you will also save mine. Please make the call."

You can sign Alison's petition and her letter to Justin Trudeau at her site, asking Trudeau to bring her children home.

I wonder. Are there any Canadian children that Trudeau does care about? Pre-born or post-born, it doesn't seem to matter to Canada's feminist prime Minister. 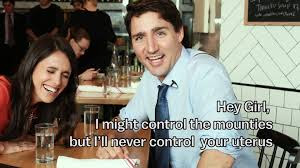 But he sure likes selfies.
Posted by Patricia Maloney at 1:15 PM