In one of my recent ATIPs to CIDA regarding the $6 million funding to International Planned Parenthood, I wanted to know what kind of due diligence CIDA was doing to ensure that no abortion services were being provided as part of this funding.

This is what I asked for:

"Copies of all of CIDA's reporting activities, regarding the monitoring and due diligence on the ground in the five countries (Afghanistan, Bangladesh, Mali, Sudan, and Tanzania), of its project with International Planned Parenthood Federation (IPPF), where CIDA ensures compliance with the funding requirement that "Abortion services will not be funded by this program. On request abortion is illegal in the five target countries. IPPF has also indicated that menstrual regulation will not be funded under this program." I would like to see all such monitoring and due diligence reports ensuring that the funding was not used for abortion services or abortion advocacy, back to the beginning of the funding agreement which is my understanding, began in January 2012?"

I will comment on these two items in upcoming blog entries.

But there was one thing that stuck out to me on the package that I received. It was this sentence:

"Through partnership and collaboration, UMATI (an IPPF partner in Tanzania) secured support for contraceptives being injectables, Jadelle, IUD and oral contraceptives."

So what is Jadelle? It is a contraceptive implant also known as Norplant. And there's been a major lawsuit against the drug and it isn't available anymore in the United States:

"After 17 years of litigation, Pfizer has reached a preliminary agreement to settle a Norplant contraceptive class action lawsuit for $29.5 million, according to Mealey's Drugs & Devices Report. The lawsuit, which was scheduled to go to trial in Louisiana, was brought by 3,500 to 4,000 women

The move comes a decade after Wyeth, which is now owned by Pfizer, halted sales of the controversial implant, which was hailed as a breakthrough in 1991. Norplant consisted of silicone rods that contained hormones, six of which were implanted beneath the skin of the upper arm for up to five years to prevent pregnancy.

A few years later, however, tens of thousands of women had filed lawsuits claiming Wyeth failed to adequately warn about irregular menstrual bleeding, nausea, headaches and depression. By 1999, Wyeth paid $54 million to settle with 36 women. The Louisiana lawsuits alleged Norplant released too much active ingredient during the first 18 months after insertion, which made the device defective.

In 2002, a federal court dismissed most of the remaining lawsuits for lack of evidence, although the Louisiana lawsuits lingered. For its part, Pfizer denied the allegations and agreed to settle in order "to put to rest all controversy" and avoid the further expense of going to court, a spokesman tells Mealey's."

Jadelle or Norplant is not available in Canada.

So a drug that's too harmful for Canadian women to use, that was the subject of a major lawsuit, that keeps women sterilized for five years, is apparently just fine to implant in women in third world countries.

Just in case you wanted to know what the government is doing with your tax dollars.

(I've updated this entry with the cover page of the Mid-Year report. Below that, is the page that identifies the use of Jadelle: "Through partnership and collaboration, UMATI secured support for contraceptives being injectables, Jadelle, IUD and oral contraceptives. Most of these commodities were obtained from local government and Pupulation Services International.") 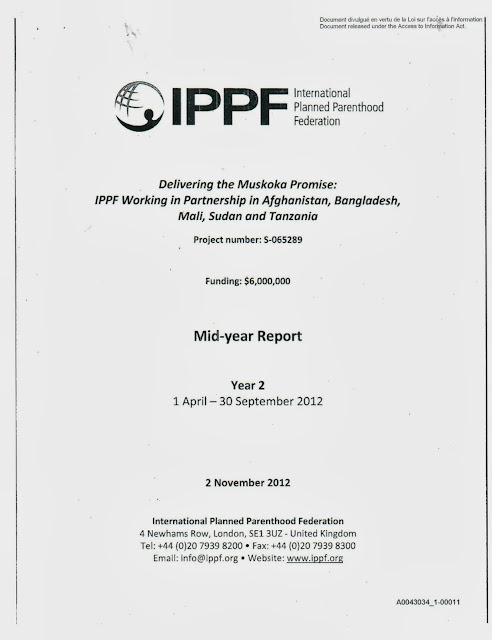 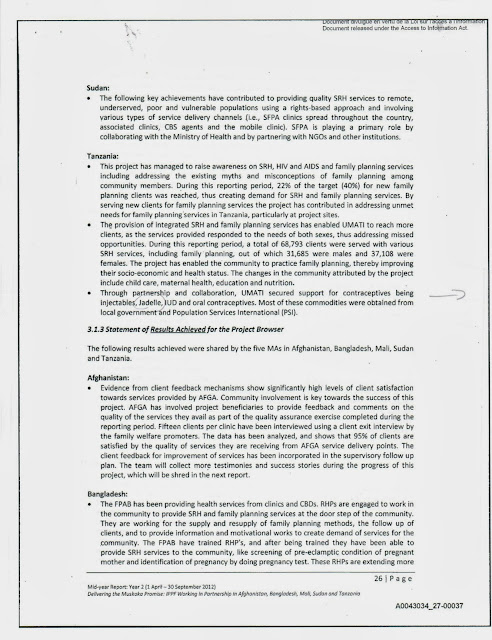 Posted by Patricia Maloney at 5:04 PM