Liberal forward for everyone = Liberal backward for pro-life

I wrote this a while back regarding the Canadian Finance department: ATIP reveals no records to support revoking charitable status of CPCs.

I subsequently submitted another ATIP to CRA to see what they had on the same subject. What I received back from CRA revealed a couple of things.

First of all, it told me that CRA would not be doing anything about revoking the charitable status on pro-life organizations (good news). It isn't their job to. It is Finance's job. But CRA did receive numerous inquiries from the media regarding Justin Trudeau's hateful, discriminatory, mean-spirited, devoid of merit, desire to remove their charitable status. For example:

Question: In the Liberal Forward for Everyone platform the party committed to no longer providing charitable status to anti-abortion organizations. Can you please tell me what is the status of this commitment? Has your department been given any sort of timeline to implement this commitment? Do you have a list of charities that would potentially be impacted by this change and could you share it?

Proposed response: The confidentiality provisions of the Income Tax Act prevent the Canada Revenue Agency (CRA) from commenting on specific cases. However, we can provide you with the following information. The CRA can only determine whether an activity of a charity is acceptable after it has fully considered the facts of a particular case based on common law. According to the common law, the promotion of health can be charitable. To be charitable, a purpose that promotes health must, as a general rule, directly prevent or relieve a physical or mental health condition by providing effective health care services or products to the public in a manner that meets applicable quality and safety requirements. For more information, see Guidance CG-021, Promotion of health and charitable registration.

If the CRA identifies that a charity is not complying with the requirements of the Act, the charity could be subject to a number of compliance actions, up to and including revocation. We encourage the public to report suspected non-compliance by registered charities to the National Leads Centre.

Note that the CRA cannot provide any feedback and/or update on leads received, or subsequent actions taken. CRA’s actions can only made public when they result in a charity being: •revoked, •annulled, •suspended

The CRA posts such cases in its List of charities. This provides transparency to Canadians regarding the decisions of the CRA with respect to charities.

Notice that these inquiries were referred back to Finance:

The Canada Revenue Agency (CRA) administers the legislative provisions under the Income Tax Act. However, any legislative changes to the Act are the responsibility of the Department of Finance Canada. As a result, the CRA cannot comment on any potential legislative changes. (emphasis added)

Okay. So clearly CRA will not do anything about Justin Trudeau's hateful, discriminatory, mean-spirited, devoid of merit, election promise.

Similar responses to media are also made in the document.

The IM Team is prepared to respond to further enquiries by referring to the Department of Finance. (emphasis added)

CRA is clearly referring these requests back to Finance. But as far as I know Finance had no records on this (as mentioned earlier).

Finally we see this statement:

The Department of Finance has asked for our views regarding the Liberal Platform commitment.

So Finance asked for CRA's views on Justin Trudeau's hateful, discriminatory, mean-spirited, devoid of merit desire, election promise. But my ATIP to Finance revealed no documents. How could there be no documents, when Finance is asking for input from CRA?

I have now asked the Department of Finance why my previous ATIP to them revealed nothing. I am still waiting for a response.

Something is definitely fishy in the State of Denmark. 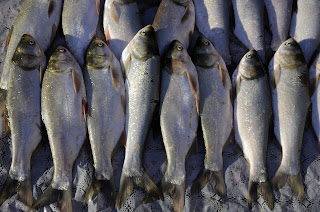 Posted by Patricia Maloney at 4:05 PM No comments:

I would really like you all to ask him that question

This is a very important news conference given by MP Cathay Wagantall. What a gracious and beautiful person she is. Far more gracious than I could be in these circumstances.

She lives in Saskatchewan, and can't take a plane or train so has to drive back and forth to her home. She won't reveal her vaccination status.

"All Canadians should be allowed exemptions" she says.

She shows the hypocrisy and heavy handedness of the Prime Minister. She clearly lays the fault of these restrictions on Justin Trudeau.

A reporter asked Ms. Wagantall "Why do you think the PM continues to extend the restrictions this week? She replied, "I would really like you all to ask him that question, over and over and over again. Clearly there is an alternative agenda and I don't think it's about Covid".

Thank you Cathy Wagantall. I wish I lived in your riding. You are my hero. God Bless you.

Posted by Patricia Maloney at 4:50 PM No comments:

There are some who say Canada does not perform late-term abortions. They are disinformation abortion lobbyists. (AKA Action Canada for Sexual Health and Rights)

According to CIHI, here are the 2020-2021 numbers. These abortions are not only late-term abortions, they are also born-alive abortions.

18 of these horrific abortions at 20 weeks gestation

93 of these horrific abortions from 21-24 weeks gestation

8 of these horrific abortions from 25-28 weeks gestation

8 of these horrific abortions 29 weeks gestation and older

To add to this horror, there were 935 stillbirth abortions performed of 20 weeks and later gestation.

If this isn't something to weep over I don't know what is. 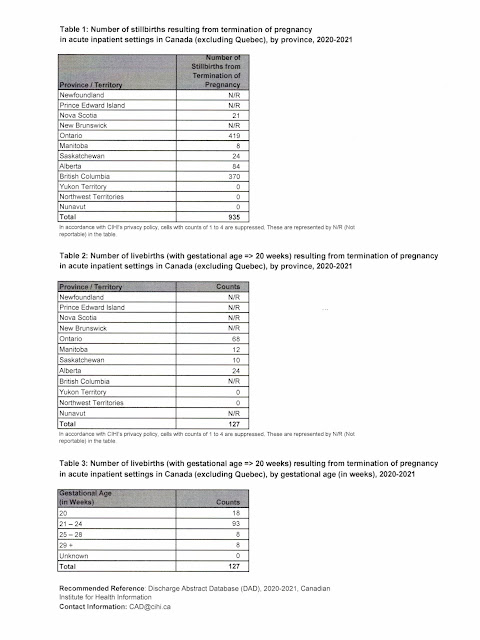 Posted by Patricia Maloney at 11:35 AM No comments:

We know that Justin Trudeau wants to take away charitable status from pregnancy care centres. It seems he follows Joyce Arthur's lead on this, who despises these centres.

However an ATIP revealed that former Minister of Health Jane Philpott seemed to have a different opinion of these centres. At least she did in her former capacity as Minister of Health in Canada, and before she quit the Liberal party when Trudeau fired her friend and colleague Jody Wilson-Raybould for being too ethical.

Here is a letter Dr. Philpott sent to someone who wrote to her about these centres. (emphasis added)

Dear,
Thank you for your correspondence of December 29, 2015, inviting me to meet with you to discuss abortion services and how improving the connection with pregnancy centres could be part of a new strategy.
Unfortunately, my schedule does not permit me to accept your kind invitation.
I commend you for your dedication in supporting vulnerable young women facing a crisis pregnancy.
Again, thank you for writing, and please accept my best wishes.
Yours sincerely,
The Honourable Jane Philpott, P.C., M.P. 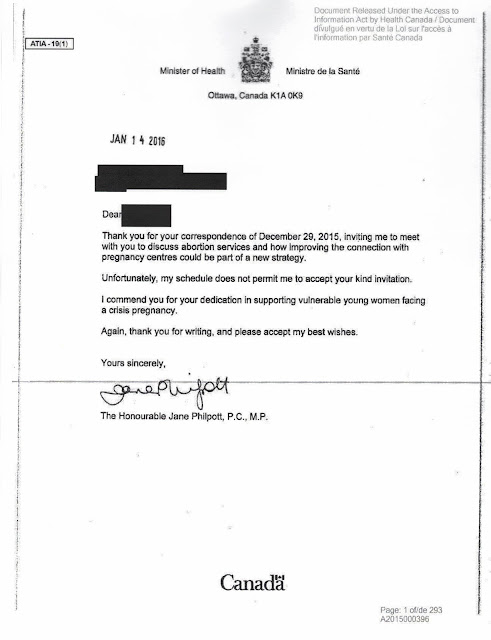 Posted by Patricia Maloney at 4:22 PM No comments:

Ten 25-28 week gestation live birth abortions is not none

A few of my posts on born alive and live birth abortions.