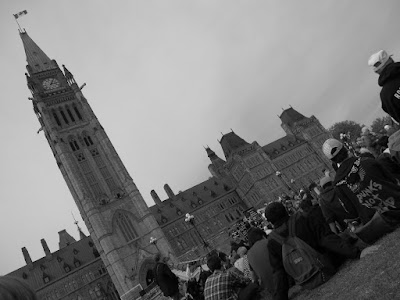 Here is a transcript of Archbishop Prendergast being interviewed by CJOH's Graham Richardson at the following link: click on "Archbishop of Ottawa talks about abortion"

Interviewer:
Well the Archbishop of Ottawa Terrance Prendergast has been blunt about a topic that many politicians simply aren’t talking about: abortion. The Catholic Church opposes abortion even in the cases of rape but Prendergast is spending less time trying to change the law focusing instead on trying to bring the number of abortions performed in Canada every year down.

The Archbishop:
I think we need to look at the issue of how many abortions there are in our country and so Cardinal Ouellet and I last week took the tact of saying, look alright we aren’t going to change the law at present anyway, so let’s do something about reducing the number. If everyone says there should be as few abortions as possible, what are we doing for that? Why are we happy that the number is staying more or less static? You know in a country like this? The Cardinal gave the statistics that with 10,000,000 people in Belgium, they have fewer abortions than they have in Quebec where they have 8,000,000 people. Why is that? Who would not be opposed to reducing the number of abortions? I don't think anybody.

I mean the other side says that we should preserve the right of a woman to choose ok? And we say well we would like to restrict the number of abortions period but shouldn’t we all be trying to reduce the number of abortions and to help the women who actually would keep the child and bring it to term if they had the resources and support? That’s really what I am underlining right now. It’s a chance to break through the impasse and to go a different way.

Interviewer:
You seem to be inside a pro-life belief, talking about other things other than the law, other than changing the law.

The Interviewer said that Archbishop Prendergast says that Prime Minister Stephen Harper is reluctant to even talk about the abortion issue.

I don’t want to comment on this but now I want to comment why because abortion is this hot potato that nobody wants to handle and everybody thinks it’s a hidden agenda item for Mr. Harper. So I say well OK given the climate we are in let’s see what we can do about helping women in difficulty, and also not just woman but also the men who are there because the men are the silent partners who in some cases don’t take responsibility for their actions.
Posted by Patricia Maloney at 6:15 PM