IPPF and Depo-Provera: what about informed consent?

When we inject harmful drugs into the arms of poor women in Afghanistan, Bangladesh, Mali, Sudan, and Tanzania, do we tell them of the drug's serious side effects?

I'm talking about the contraceptive Depo-Provera. (revealed through an access to information request to DFATD on the $6 million funding to IPPF for the Maternal, Newborn, and Child Health initiative)

So what are the drug's side effects?

Depo-Provera doubles the risk of breast cancer in women (2), causes severe bone loss forcing Pfizer to put a black box warning (3) on the drug. The drug also has horrible side effects for women coming off the drug, as reported by women themselves. (4)

Are we telling them of these risks? What about informed consent (5)? Laura Shea of the Women's Health Network wrote a 22 page paper on this drug. She discusses Bone Density loss, and the other side effects. She also comments on its use in developing countries.


"Many women’s groups have opposed the use of injectable contraceptives like Depo Provera in developing countries because Depo Provera poses particular health concerns for poor women, who may have low bone density due to poor nutritional status. These women are already vulnerable because access to local health care facilities is often inadequate or non-existent, and the right to informed consent is often overlooked..."

And just last month we learned that Depo-Provera is linked to a 40% higher risk of HIV.

So what is Canada doing about this? We team up with the Bill and Melinda Gates Foundation, who also provides Depo-Provera to poor countries. (7)

One of the mantras repeated over and over again throughout the hundreds of pages of documentation I've received from DFATD on the IPPF funding, is how IPPF is helping "remote, under-served, poor, and vulnerable populations" in these countries.

Does IPPF inform these women of the very serious side effects of these drugs? Do they explain the risks in the women's own language? Do these women benefit in any way from informed consent?

I couldn't find any references in the mountain of documentation I received, that referred to informed consent in any way. Yet IPPF tells us they are helping "remote, under-served, poor, and vulnerable populations". With Canadian money. 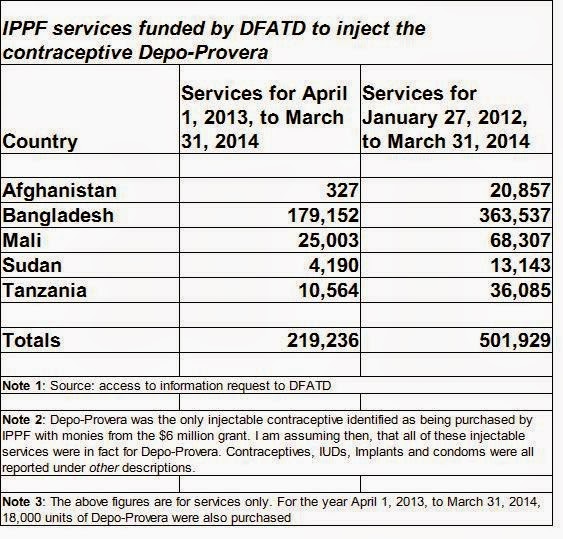 (2) A study of Depo-Provera

(4) Coming off Depo-Provera can be a woman’s worst nightmare April 4th, 2012 by Laura Wershler

Side effects as reported by women themselves (682 comments)

Depo-Provera: Does this Contraceptive Choice Support the Health and Well-Being of
Adolescents and Young Women? (From a paper written by Laura Wershler for Canadian Woman Studies in 2005)

"One acknowledged outcome of Depo-Provera use is the time delay (three to 18 months or longer) after the last shot for a full return to fertility. This recovery time can be, for some women, fraught with distressing health problems for which no apparent treatment protocol exists. Weight gain is extremely common and more extreme in teenagers than adult women. Many women discontinue the drug for this reason. The depressive effects of DepoProvera are well known. Severe depression, anxiety, and paranoia have all been reported. Some women experience symptoms while on it, others experience depression after stopping the drug. Hot flashes, vaginal dryness, and other menopausal symptoms experienced by some women are directly due to the "bottomed-out levels of estrogen and testosterone" (Rako 1 10) that are also responsible for loss of bone density. Loss of desire for sex and loss of sexual sensitivity are also subsequent to hormonal depletion. Herein lays the irony of DepoProvera use by young women. The drug induces the hormonal profile of a menopausal woman and with it the potential to experience the full constellation of symptoms (once thought to be all in women's heads) that can so diminish the quality of life for women in mid-life and beyond. As a contraceptive choice for teenagers and young women, DepoProvera provides them the opportunity to experience loss of libido, vaginal dryness, unmanageable weight gain, depression, bone loss and other unpleasant outcomes in exchange for pregnancy prevention. These negative side-effects cause many women to stop using the drug, but others tolerate them, often not aware their symptoms are related to their choice of contraceptive. The other irony? Women who tolerate Depo-Provera best are most likely to take it long-term and, therefore, are most at risk for significant and potentially irreversible bone loss... "


"International use as a population control measure

Historically, family planning programmes typically limited contraceptive choice to those methods that resulted in either: 1) permanent sterilization, or; 2) temporary sterilization as in the case of Depo Provera. Even before its approval as a contraceptive, Depo Provera was promoted by family planning programmes and population control agencies, predominantly in the so-called “developing” countries, because it was identified as a highly effective, provider-controlled technology that promised to drive down birth rates among poor women. Many women’s groups have opposed the use of injectable contraceptives like Depo Provera in developing countries because Depo Provera poses particular health concerns for poor women, who may have low bone density due to poor nutritional status. These women are already vulnerable because access to local health care facilities is often inadequate or non-existent, and the right to informed consent is often overlooked..." (emphasis mine)


"Depo-Provera is associated with an increased risk of HIV infection in women, according to a review of research in Africa.

Women who receive the so-called “birth control shot” have about 40 percent higher odds of becoming infected with HIV, compared to women using some other form of birth control or no birth control at all, researchers reported."


"...And Mr. Harper, do you see that the same way, that reproductive health needs to be a part of the initiative?

[Stephen Harper] Yes, there’s actually a myth that we don’t fund any family planning or maternal health. That’s not true. We do. We, specifically as a result of a vote in Parliament do not fund abortion services but we fund other forms. And yes, I do happen to believe that’s an essential part of the continuum."

Posted by Patricia Maloney at 4:50 PM