I recently submitted a Freedom of Information request to the Ontario Ministry of Health and Long-term care for 2010 abortion OHIP billing information. This is what I asked for:

(Procedure descriptions here and here and are also included in my graph below. The graph also contains a compilation of the statistics that I received from the Ministry.)

There were 77 selective fetal reduction procedures done in Ontario in 2010.

(Note: this is only what doctors billed for. See Ministry notes 2 and 3 below regarding costs. Therefore this base cost does not appear to reflect the total cost of an abortion to the taxpayer, which has been estimated at an average cost of about $800/abortion)

We have suspected that CIHI/Statistics Canada abortions have been under reported. These 2010 figures from these OHIP billings, are actually about 45.4% (my original entry reported this at 31%, which is incorrect) higher than the CIHI figures for 2009 and seems to confirm that abortions are being under reported in Ontario.

(The following three notes were included in the response I received back from the Ontario Ministry of Health and Long-term care for this 2010 abortion OHIP billing information.)

(1) The total procedures corresponds solely to the volumes of these procedures as per listed fee schedule codes.

(2) The total billed is based on the billed amount submitted on the claim and does not necessarily represent what was approved and paid for the claim (emphasis included). For example facility fees for specific TA clinics are not included in the fee billed total. The total billed measure includes billed amounts for the professional component volumes as well as the anaesthesia and/or surgical assist components where applicable.

(3) Both fee-for-service as well as globally funded claims were included and restricted to Ontario physicians, in-province claims only. Any potential out-of-province, out-of-country claims were not included.

Click on the graph below and it will enlarge. 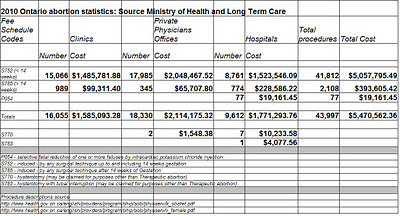 Posted by Patricia Maloney at 10:41 AM